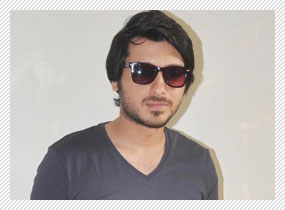 In one of the surprise hits of 2011- Pyaar Ka Punchnama, Divyendu Sharma made a superb debut playing the proverbial loser -'Liquid'. Now he is all set to play the 'Kamina'

friend Omi in Chashme Baddoor where he has a 'shaayri' ready for any and every occasion. Bollywood Hungama's Nikhil Ramsubramaniam met up with the

talented actor and spoke about his role in the film, his funny one-liners and shaayris, his experience working with David Dhawan and how they bonded over their days spent at

You made a superb debut as 'Liquid' in Pyaar Ka Punchnama two years ago, what took you so long to do your next film?
I did get a lot of offers after Pyaar Ka Punchnama but they were all very similar to Liquid's character. I didn't want to again do a same type of character hence I was a bit choosy.

So what was it that made you say yes to Chashme Baddoor?
David Dhawan sir called me after watching Pyaar Ka Punchnama and I was honoured when he offered me a role his next film. When I knew it was his version of Chashme

Baddoor, I was even more thrilled. I've been a huge fan of Sai Paranjype's work especially Chashme Buddoor. However, at the same time, I was also a bit skeptical since it's

a cult classic and wondered if remaking it was a good idea. However, the day I met Davidji and heard his vision of Chashme Baddoor, I was relieved. Even though the basic

premise is the same, it's a completely different take on the original and very well adapted to modern times. I liked the script, the writing, the cocky humour and just went with my gut.

You are playing the character played by Rakesh Bedi in the original, tell us what changes have you brought about to the character since there will always be comparisons with the

Like Rakesh Bedi, I also play a shaayar (poet). I was excited that I'll be playing a shaayar. However, Rakesh Bedi's character used to do authentic shaayri, my

character Omi is more tongue-in-cheek with his shaayris. He means every word of what he says. Like when he says, "When you can't change the girl, change the girl", he

actually means it. When I read the part, I was in love with my character.

You seem to be having some of the best lines in the film courtesy your many shaayris. Which is your favourite dialogue?
There are so many superb lines yaar but if I had to pick one it would be 'Agar Tum Safed Saaree Mein Laal Bindi Laga Kar Aa Jao Toh Maa Kasam Ambulance Lagogi'. Sajid &

Farhad have done a wonderful job. You'll see a different side of them in this film. Thanks to them I have got such brilliant lines.

Your first film Pyaar Ka Punchnama too had a lot of male bonding between Kartik, Rayo and yourself. This time too you have Ali Zafar and Siddharth as your buddies in the

film. So how was the experience?
It's been a wonderful experience. We all got along superbly and it's all because of David Dhawan sir. As a director he brings in so much positivity on sets that he eases everyone and

you are in a comfy zone. We were all on the same platform. There was no favoritism at all so it was really easy to bond. We had a gala time shooting in Goa. The place has an inherent

cool vibe to it and it was like one big picnic. We were sharing jokes, have our meals together, sitting by the beach and chilling post pack-up. So it was a superb experience.

You have done your acting diploma from the reputed FTII and David Dhawan is also an alumnus of FTII, was that a common ground to break ice?
Absolutely...David Sir is my super-senior. He is still so much in love with FTII and still cherishes the years he spent at the institute. So we bonded a lot over FTII related talks,

reminiscing fond memories. FTII is like a utopia for an artist. Once you go inside, you don't feel like leaving the institute. Every single brick and wall of the institute breathes cinema.

David Sir used to tell me about the institute was during his days and I used to share my more recent experience. So it was good fun.

Coming back to Chashme Baddoor, the film has been ready for a while now and was supposed to release sometime last year. Do you think the constant delays and

re-shuffling of dates will affect the B.O. prospects of the film?
No...I don't think so. It's a call taken by the producers as they are the ones who put in money in the project. Viacom 18 and their team know what is the best marketing and release

strategy for their film and obviously they want the film to do well. I am pretty confident about the film as the general buzz is very positive.

Finally, what are your forthcoming films?
I've just finished a film called Zaalim Dilli...it's a heist flick set in Delhi and stars Pradhuman Singh (of Tere Bin Laden fame), myself, Ira Dubey and Jackie Shroff as the

main villain. It's written by Manu Rishi and directed by a new girl called Japinder. I am also in talks for a few other projects that are yet to be finalized.