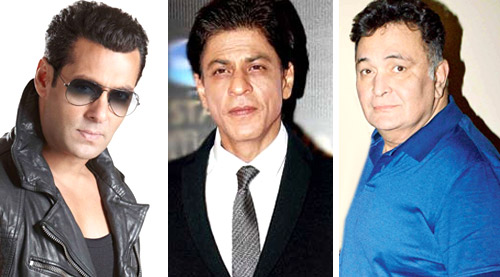 During Salman Khan's hit-and-run hearing in the session court, Rishi Kapoor got severely slammed by Salman's fans for reprimanding the sycophantic tweets in the superstar's favour.
Rishi shudders as he recalls the volume of personal attack. "I am very fond of Salman and as concerned for him as all his well-wishers. He's like my younger brother. But to abuse me for my disgust at the comments made by people like singer Abhijeet and some guy called Ajaz Khan who just wanted to show Salman how loyal they were... this is the height of intolerance. Arrey baap re. I even got slammed for not knowing how to spell Ajaz's name!"

Disgusted by Ajaz's comment, Rishi Kapoor says, "What did he mean by saying he didn't care for the law of the country? I believe he has won Bigg Boss, or whateverâ€¦I don't care who he is. But you can't say 'Bhaad mein gaya law country ka'. This is provocation of the worst kind. This isn't star-worship. This is sedition. And what did Abhijeet mean by comparing those who sleep on streets to dogs? Chamchagiri ki bhi hadd hoti hai. You can't provoke the youth of the country just to please Mr Salman Khan. Even I am his well-wisher. But the law of the land is above all. Don't provoke young people to disregard the law."

Rishi Kapoor was subjected to scathing abuse. "I was getting 30 messages together. The "f" word may come into the dictionary in the near future. I can live with that. But to be subjected to filthy maa-bahen ki gaaliyaan....These are all kids, HUGE Salman fans they call themselves Salmanians. They are very powerful. They shouldn't be provoked."

"They were sending claps," laughs Rishi. "I was caught in the crossfire between Salman and Shah Rukh fans for no reason."