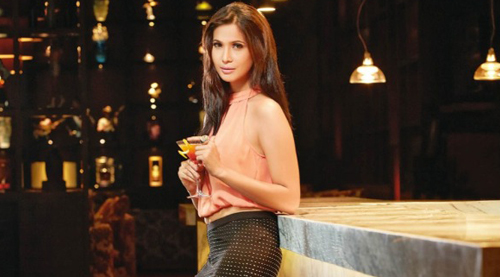 An Uttar Pradesh girl who went on to do her Engineering in Computer Science, followed it up with post-graduation in Management, worked in a leading international bank as an Investment advisor and eventually won Miss India crown for herself in 2012, Prachi Mishra has had an eventful journey so far from academics to the world of glamour. Well, this isn't where she is stopping as Prachi is now making her Bollywood sojourn with Japinder Kaur Baweja directed Dilliwaali Zaalim Girlfriend, where she is paired opposite Divyendu Sharma (of Pyaar Ka Punchnama and Chashme Baddoor fame).

From being a Miss India to a leading lady in Bollywood - Was it a natural progression for you?

Well, I did not plan as much and just went with the flow. What I certainly wanted was to be in front of the camera. I was never working very hard to accomplish that though. I go easy with life; I wouldn't have died had I not got a movie. It is just that I had this at the back of my mind to try my hand at acting. In fact when I was working as an investment advisor, I used to joke around with my friends that one day they would have to come and visit me in Mumbai as I would be an actor. I am glad that it turned out to be true. Guess I did my homework right to step into the right direction.

Did offers start coming in soon after the Miss India happened?

After Miss India you are so busy for one year that you don't have time to breathe. The only thing that is in your mind is to get the international crown next. So for about six months after Miss India, I was busy with the international pageant. Then when I came back, I needed a break so I went to my sister's place in LA for a month. So effectively I didn't do much in Bollywood for one year. Later, when I was on my own, it was time to figure out what to do in the industry. This is when I got this offer from Japinder for Dilliwaali Zaalim Girlfriend. We shot the film extensively in Dubai and India. This is a very good launch.

Did presence of your co-stars help you in taking this decision?

Absolutely. You know, before this movie, I got a few offers but mostly they were either with new actors or the director was new or the script was boring. In case of Dilliwaali Zaalim Girlfriend, everything just fitted in well. Divyendu is a known actor, Pradhuman (Singh) was so good in Tere Bin Laden, Ira (Dubey) is a brilliant actor and then of course there is Jackie Shroff. I was sure that I was working with all these talented people. Moreover, the story of the film is amazing as it is written by Manu Rishi Chaddha (Oye Lucky! Lucky Oye!). The sitcom kind of set up is exciting too.

You do have a romantic interest with Divyendu on screen. How did the off screen tuning with him turn out to be?

Divyendu is a little reserved initially but when you become friends then he is good. We were not good friends initially as he was senior to me. However after one or two days we started gelling well. He gives good advice on script as well. In fact particularly about Dilliwaali Zaalim Girlfriend we could exchange quite a few notes since I personally knew a lot of my guy friends who had gone through something like what Divyendu goes through in the film due to me being 'zaalim' (smiles). As for my other co-stars Ira and Pradhuman, they were also nice; it was fun to shoot with them.

Since you come from Miss India background, does the film give you a good opportunity to showcase the glamour side of you?

In fact this movie doesn't really require much of the glam element since I am playing a girl who comes from a Finance company. Since I have worked in a bank, I knew little bit of finance and it worked for me. Coming back to your question on the glam part then well, it comes on screen only when these songs pop up on the screen. Having said that, when I signed the film then there wasn't much of the glam quotient on paper. So this guy (Divyendu) falls in love with her, though she is not in love with him. This is how she becomes zaalim (laughs).