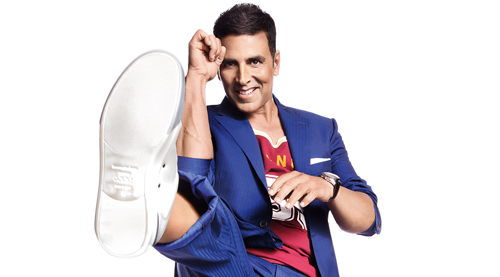 Akshay Kumar has continued to demonstrate consistency, what with the opening weekend of Singh Is Bliing being his biggest ever. For an actor who delivers an average of

three to four films a year, in 2015 he has seen enhanced weekend footfalls with every passing film. We get into a quick tete-a-tete.


You seem to have pleased all those who had whatever doubts around the content of the film w.r.t. how Sikhs are presented in the film. A win-win situation for all much before release?

I would never ever want to hurt, upset or displease anyone in the Sikh community. They are family, they are loyal to me. I will make it my life's duty to always be loyal to them and their faith.

Pick up any song from the film, whether it is 'Tung Tung', 'Singh and Kaur', 'Aaja Mahi' or 'Chu Chee', they have all pretty much turned out to be rustic and desi entertainment.

Guess you went all out here.

The songs are so lovely and full of life, love, happiness and of course the incredible Punjab. They are a big taste of what the film is about; it's all spicy, tangy, meetha and a masala of magic!

The film has you and Prabhu Dheva coming together again after Rowdy Rathore. How have you and he managed to understand each other's filmmaking style with Singh Is Bliing?

We understand each other very well in fact. We are both expressive, we are not talkers, we don't discuss things, we get on and do it. Prabhu Sir is so creative. He is very passionate yet very quiet

about his work. He is humble to the core. What better duo than the King of song & dance and the King of Singhs to bring you Singh is Bliing (smiles).


On the other hand Amy Jackson is someone who is pretty for sure. However, in the entire milieu and world of Singh Is Bliing, has it ensured that she fitted in as a performer as well?

Luckily for us, Amy was everything we needed her to be. Of course she is very young and has many years ahead of her to learn all she needs to learn. That said, I don't take on perfection in my

films, I take on passion and drive. That's what helps make this industry grow!


The film also sees Lara Dutta returning with you as an actress in an incredible comic avatar. That must have rekindled memories associated with her from the past, right?

Lara is an angel without wings. She is always up for whatever I throw at her. Again, she has surpassed all expectations like a trooper. She never fails to amaze me and amuse me. Singh Is

Bliing would be empty without her and her crazy personality. Miss Universe has a lot of bling up her sleeve!


Baby was the only success for the first quarter of 2015, and then later it was Gabbar Is Back that finally brought people back in theaters. Your last release Brothers took

the best opening of the lot and now Singh Is Bliing has seen your biggest opening ever. Guess being consistent is what makes you the most reliable of them all, isn't it?

Stunned by how well you have done your homework, I must say (smiles). My dedication is what makes me reliable. My consistency is all due to the Gods. Without their blessings, there is no success!

It would be the biggest achievement to watch my films grow throughout the year from January's Baby to October's Singh Is Bliing. But I had never asked for it; it would just e nice,