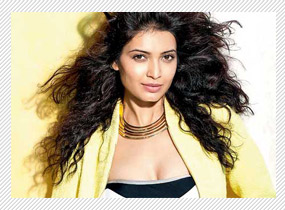 At Starbucks, the men behind the coffee machines lived something that could've only taken place in a Pixar movie. They served a bland iced coffee instead of green tea latte coz they were distracted. The reason for this distraction was KarishmaTanna, who stood 5 feet 9 inches tall at the billing counter, and boy, she does have a way of making that first impression. On the film front, the actress has taken giant strides from being a sweetheart in Grand Masti to a kick-ass sweetheart in Tina & Lolo, her next - an action thriller with Sunny Leone. In person Karishma is like your best friend - she giggles with lots of hand gestures, then she pats you on your leg and shoulders and gives you a confirmation that you own her, a bit of 'Gujarati slang' thrown in, but most importantly, she gives you almost two hours in her company that most best friends do. For an actress who has already given a 100 crore hit at the B.O, Tanna doesn't have a trace of arrogance. She's not trying to put on any airs or be anyone she's not. She's the real deal. She's just this amazing Gujjugirl from South Mumbai who is greedy for more movies. Or in her words 'I'm horny for more'.

“I need another 100 crores to my name soon” – Karishma Tanna

You've been there done that. But are you bothered at all about your late entry in movies?

No one knows but I've been trying for films since years. Television happened by chance. I couldn't see myself in fictional shows on the T.V. I rather did a lot of non-fiction shows. Initially, T.V. celebrities were not entertained in B-town. But after seeing a lot of T.V. actors getting their share of break in movies, it opened doors for anybody and everybody who wanted to do movies. I was very positive that I would get a film because I knew I deserved it. My dear friend VivekOberoi recommended me for the film. IndraKumarji really liked me and the rest is history. I want to think positive from here on.

From a mad adult comic caper to a grungy and sexy action film Tina & Lolo. You fancied being an action chic?

I always wanted to do action films because of my physicality and personality. I wanted to do films on the lines of Charlie's Angels, Tomb Raider, etc. To get Tina & Lolo was an icing on the cake. It's my first action film with Sunny Leone as my co-star. And let me tell you, after this interview gets done, I'll be busy in my bike class. Oh, I love the sound of bikes.

A lot of actresses are insecure about Sunny Leone. Are you?

I am very secure with Sunny Leone because I am secure about myself. I know what I am capable of. I will tell an actress if she is gorgeous. And yes, Sunny Leone is one of the most beautiful women I've met. When I met her for the first time, she looked so doll-ish. I didn't have to think I had to look more beautiful than her. We both together are going to scorch the screen.


Would you love to be a part of the Grand Masti sequel?

I would love to be a part of Grand Masti's sequel but I would also not want to repeat my character. Yes,be it T.V. or Films, I'll never do the clichÃ©. I don't want to be typecast. If it's a different character, I'm up for it.

Was the first schedule of Tina & Lolo tough?

The toughest scene we've shot in Tina & Lolo so far is with the harness, doing action in mid-air. The jumps were challenging too. You need to have a technique to fight and give the expressions where you don't look funny because you are cringing and at the same time you are boxing. On a girl, cringing doesn't look very good too. To balance it out, in looking hot and rugged is the key and I've maintained that in our first schedule. It's going to get hotter as we shoot.

What newness do you find in working with your directors - Indra Kumar and DevangDholakia?

I think the experienced directors and producers are blending in and moving according to the current times when it comes to story-telling, editing and filming. Indra Kumar jiis molding with the youth. He was thinking more younger than us actors put together. We were getting embarrassed more than him but then he was thinking like any college goer. As for DevangDholakia, he's got this insane humor that he so smartly uses both on and off the sets. He's thinking very young and fresh for Tina & Lolo as a director and as a producer because the subject itself is an innovation.