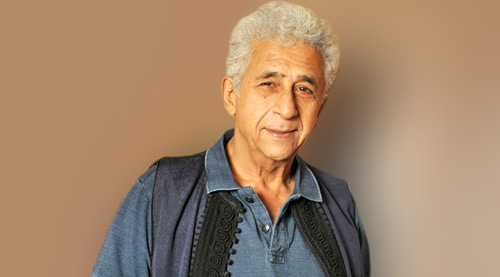 "I don't consider Sholay as a great film and I've written three pages about it in my book 'And then one day'," said

Naseeruddin Shah in an interview to Bollywood Hungama in Abu Dhabi recently. Shah has a way with words and he doesn't hold anything

back, nor does he turn politically correct at any point of time. Laced with a razor sharp sense of humour and heart-tugging self admissions, Naseer

sahib opens up on his views on Bhaag Milkha Bhaag, his views on Mr Bachchan as a great communicator, the efforts that he is making to

open up with his children, what advice he gave to son Vivaan Shah, his passion for theatre, his views on remake, why he agreed to be a part of

Welcome Back and why good writing is the most ingredient for theatre as well as films.

capersâ€¦
Why? I have done films like Mujhe Mere Biwi Se Bachao, Zinda Jala Doonga, Tridev and Tehelka! I have worked with great directors

When you did Tirchi Topiwale, lot of people thought that you have sold out to commercial cinemaâ€¦
Yeah, they were fools to think that. The third film of my career was a commercial film with Rajshri Productions called Sunayana. Uske gaane

hoon. I have always tried to do both kinds of films.

There is a general perception that you'll say yes to a script if it's very good. People generally think that if Naseer bhai is doing it, it means it has

Menon aur Atul Kulkarni - aur humne socha ki bahut mazaa aayega. So for each film, there is a different reason.

saath I entered into that film. But it turned out to be very, very bad.

Director Veena Bakshi has been quite upsetâ€¦
Let her be upset.

She alleges that you were paid Rs 1.5 crore for the film merely for promoting it...
No I was not. She is lying through her bloody teeth if she says that. I never demanded extra money. I just refused to work with her anymore. She

did not know the front side of the camera from the backside.

So you play a don in Welcome Back and apparently your character is blindâ€¦
Yes. Real blind, not like 'Mohra-blind'!

So how was the character of playing a blind character and a don?
It is like doing a parody of my Sparsh performance. But yeh ek Anees Bazmee ki genre ki film hai. To jo Anees bhai ko chahiye tha, woh