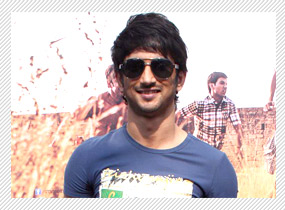 Never give up on your dreams, just keep doing movies. Sushant Singh Rajput was born to be a pin-up. After Kai Po Che, Sushant's already tagged as an accomplished actor with a lengthy resume. Yes, he's got Rajkumar Hirani's and YRF's next. A perfect 'overnight success story'. The four great essentials to be a success in Bollywood are - perseverance, passion, common sense and that willpower. Sushant's pocketed it all. So brace yourself - If you had a hard time accepting Sushant's success, you might not know what to make of his latest incarnation - God of Bollywood. Yes, girls have started calling him just that. For now, you can give him any name. I'll call him 'a rare breed'. Presenting you Sushant's success story and beyond. Soar high buddy!

You are kidding! I am damn excited (laughs). It's exciting times for me. I auditioned for this role and I was just praying to God that somehow or the other I be a part of this film. I know my craft well and I am a convincing actor and a hardworking one. I knew one day I will get my due in the industry. Kai Po Che is that due.

Did you ever get emotional after seeing figures like Rs. 30 crore plus and still counting?

I am an actor. But the first time I got emotional was during filming Kai Po Che. The thought of me not playing Ishaan' character again was quite painful. I am nostalgic as of now. I enjoyed the process of shooting than the box office reports.

Where do you see yourself from here on? Aren't the stakes high for you? You are pitted as the next big thing.

As of now I am doing two movies. One is Rajkumar Hirani's PK and the other is with Maneesh Sharma for YRF. I am not the next big thing or the next best thing. I switched my career from theatre to television to films. The whole point of going through all these different entertainment options was to learn the craft and work with the best from our industry. I want to keep learning. I am never satisfied as an actor.

From Gattu to Hirani. There you go!

Yes. I am so excited to work with Rajkumar Hirani. I auditioned for the role and Mr. Hirani was present for my audition. He wanted me to try the same act in many other ways. He was very happy at the end of the day. I prayed and prayed and there you go.

It has to be Scarface, then Serpico, My Left Foot, Dilwale Dulhaniya Le Jaayenge. I love Shah Rukh Khan in it and the fifth has to be the recent Les Miserables.

You may work with SRK or Big B or many top actresses tomorrow, but how special will Kai Po Che remain?

Special is an understatement. It is my first film. Everyday I fought for this film to be a part of it and today I am so proud. The cast and crew were so honest and skilled. That's what makes it special.