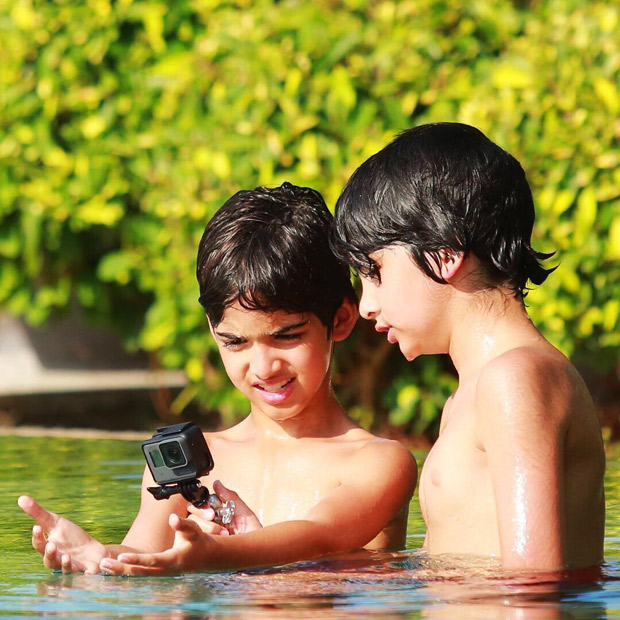 Hrithik Roshan spends a lot of time with his sons and is often seen going on trips to picturesque locations with them. This time around the superstar took off to the US for a two-week holiday with sons Hrehaan and Hridhaan.

Just like his previous vacations, Hrithik Roshan also took to social media to share an image from his holiday. However, this one was quite different. As in, he shared a picture of his sons trying to handle a gadget whilst in the swimming pool as they suddenly realize that there is something wrong with it.

Eavesdropping on the conversation his sons were having, the father Hrithik Roshan was quite surprised to see the way his sons wanted to cover up for breaking a gadget and he posted the same on social media. He actually shared the entire interaction on Instagram and here’s how it goes:

“Ridz: Is it supposed to do that?

Ray: No dude, you broke it.

Ridz: Should we tell dad?

Ray: No way. We need to hide this.

Ray: Nah, we'll go tell him we are hungry.

Ridz: But he's going to see!

Ray: Arey we'll talk about food. He's not going to see anything else.”

Adding hashtags like ‘#Machievellisinthemaking #foodismyblindspot’ Hrithik Roshan’s this mischievous side definitely showcases a much more personal side of Hrithik as a father.

On the work front, last seen in Kaabil, Hrithik is exploring different genres as he will next be seen in Kabir Khan’s untitled next as well as he will be seen as mathematical wizard Anand Kumar in his biopic directed by Vikas Bahl.