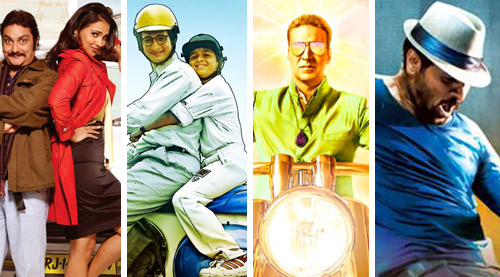 The recent Piku only slightly hints at a future romantic bonding between Piku (Deepika Padukone) and Irrfan Khan. Otherwise, the film is completely devoid of 'love', as in on-screen romance. And yet, its collection have crossed a hefty Rs 70 crore in India and made a packet overseas as well.


Love is the driving-force in almost all Hindi films. Even when a film centers round a hero sans heroine (like Rajesh Khanna in Anand), a single dried flower in his diary depicts a past romance. And second hero Amitabh Bachchan's love story is there as well. In an extreme example, Sunil Dutt's Yaadein had his romantic relationship with his wife as the baseline for the plot of this one-actor experimental film.


Everything else apart, a Hindi film minus love is also not expected to succeed commercially, just like a Hindi film minus songs. But when good stories are told, love can take a backseat, as Piku proved , and so did these 11 older films, nine of which came from 2005 onwards.


Dharamputra (1961): B.R. Chopra's film (directed by younger brother Yash) on a man (Shashi Kapoor) who is born a Muslim, raised as a Hindu and becomes an anti-Muslim fundamentalist was a National award-winner but only a moderate success. However, decades down the line, it inspired two more similar films, Dharam and Dharam Sankat Mein.


Shaheed (1965): Manoj Kumar wrote, ghost-directed and enacted this 1965 masterpiece. A focussed story about the martyr Bhagat Singh and his associates during India's Freedom Struggle, it had no heroine diluting the linear plot.


Black (2005): This moving and magically-mounted Sanjay Leela Bhansali film was about a blind and deaf girl (Rani Mukerji) and her coach (Amitabh Bachchan) had just one sequence where both student and teacher fleetingly succumb to physical temptation-with a lip-to-lip kiss.


Chak De! India (2007): The Shimit Aman super-hit saw Shah Rukh Khan as a disgraced hockey player later training 16 young girls for the Hockey World Cup. Though there were small side stories of two girls, there was no leading lady or full-blown romance in this hard-hitting story on sports that was actually about how most Indians lack a sense of National unity.


Dhamaal (2007): Indra Kumar dared to make a racy road comedy minus a single female in the cast-and scored a hit in this cult caper that is a super-hit now on satellite. The film was about four (male) friends, a cop and hidden treasure.


Taare Zameen Par (2007): Aamir Khan produced, directed and acted in this lovely story about a dyslexic child and his dedicated teacher (Khan), who has to fight dogmas, society and even the boy's parents to bring the child out of his handicap. So where was the scope for love or a heroine?


A Wednesday! (2008): A patriotic epic by Neeraj Pandey, this was like an exhilarating mind-game of chess between a furious top cop and a terrorist. The film did not waste time on commercial elements like song or romance-and won the day, not just Wednesday!


Chalo Dilli (2011): This warm-hearted comedy entirely revolved around a crude but golden-hearted Delhi-ite (Vinay Pathak) and a propah, la-di-da big-name executive (Lara Dutta) when they are forced to share a complicated journey and a hilarious series of misadventures-together.


Ferrari Ki Sawaari (2012): Though just a break-even success, the film once again saw a young man (Sharman Joshi) determined to make something out of his life. There was no girl to deflect him from that goal.


OMG: Oh My God! (2012): An incisive film on blind belief and superstition, the super-hit was about the struggles of a star-crossed, non-believer businessman (Paresh Rawal) and his encounters with both a bigoted world and Lord Krishna (Akshay Kumar in a brilliant cameo) himself!


ABCD - AnyBody Can Dance (2013): None of the protagonists-a dance coach (Prabhu Dheva) who has to prove himself, his loyal friend and his friend-turned-foe-had a romantic track. Yes, there was a small tragic love angle between two of the many students trained by the coach, but in essence, ABCD remained a film on dance that never moved away from its focus to get into romantic affairs.