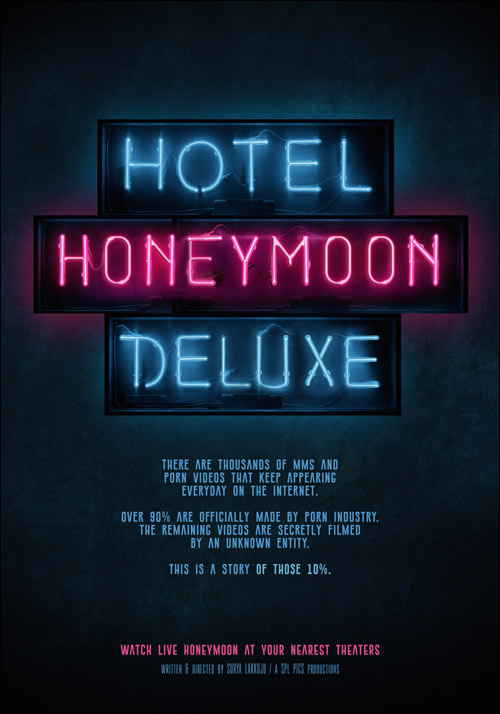 Hotel Honeymoon Deluxe is based on true events which will hold you with its intense drama and pacy narrative style," claims Surya Lakkoju. It will be shot in a voyeuristic manner which makes audience witnessing the whole event themselves.

The story revolves around a honeymoon couple whose private moments has been captured through hidden cameras by a gang who tries to rake some moolah by supplying the hardcore sex footage illegally to adult websites. The trauma of the newlywed couple when they come to know about their secret filming is highly devastating; not just that...what the gang wants to do further with them will be more shocking.

The director claims, "Hidden cameras inside a much secured hotel can make audience easily relatable, because the issue is heard many times in our recent growing tech-culture. I took few real incidents I heard and read aboutâ€¦ and then I did my own research with the help of few journalist friends. Now I am putting all that together in this film into the most realistic format. I am approaching the story with a very riveting thriller sense, it should not be mistaken as found footage or dragging documentary film."

A pacy thriller set up in Agra & Goa, HHD will be at par with any international feature film in terms of treatment, narrative and its filming claims the director as he wants to take this film to the global audience through digital platforms as well besides the traditional theatrical release.

Surya has just completed his horror thriller - Chudail Story which is schedule to release 29th April 2016. Hotel Honeymoon Deluxe is produced by SPL pictures. The casting has been done after a number of auditions amongst various theater artists and fresh talent. The cast includes the talented newcomer Veer Choudary, Om Prakash, Khushboo Poddaar, Amal Sehrawat, Shreya and Sunny Charles.

The film is all set to be shot from mid of April in Agra & Goa subsequently and the film is slated to release in July this year.