Goan model Scarlett Rose rose to fame during her stint on the reality show, Splitsvilla. The model managed to stay until the end of the season on the show and eventually became a social media star. Scarlett Rose, since, has been doing her modelling gigs and raising the temperatures with her sensuous photoshoots. 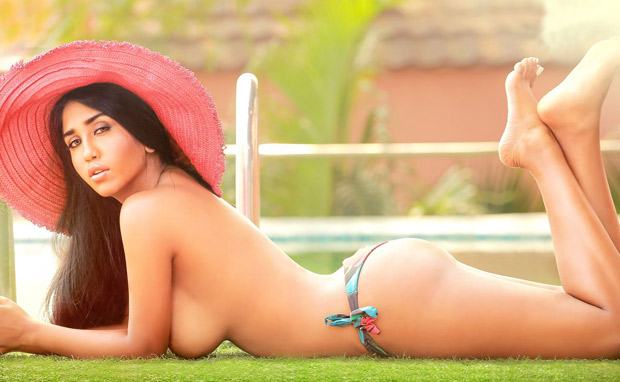 Scarlett Rose, often called as Sexy Scarlett, is making jaws drop in a calendar photo shoot by photographer Amit Khanna. The photographer launched the first ever digital streaming calendar powered by the digital hash which showcased sizzling hot Indian models and actresses in their boldest avatars.

Scarlett Rose is definitely raising the temperatures as she has gone topless in the shoot. Just wearing a bikini with a hat, the actress is gazing at the lens. She looks absolutely stunning in this latest bold and sexy shoot.

Besides Scarlett Rose, the calendar features girls like Karishma Sharma, Tina Dutta, Diandra Soares, Suzanna Mukherjee, Iris Maity, Sony Kaur & Quetee Nagpal among others. Talking about his sensuous & unusual concept, Amit Khanna said, “I am extremely pleased to work with these 12 lovely girls. I respect their confidence and talent. I am also thrilled by the support of digital hash. This calendar is a step forward that is all set to burn your screens”.

Produced by Anuya Chauhan Kudecha and Ritesh Kudecha, the theme of next year’s calendar is raw sensuality set in languid scenarios. The sheer magnetism of each girl of the 12 girls for each month is palpable.

On the work front, Scarlett Rose has worked in few TV shows including in MTV Fanaah, Kaisi Yeh Yaariaan, to name a few.