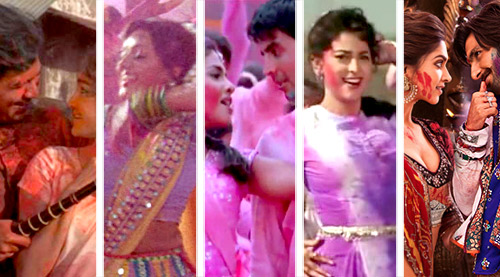 Holi has always been a special occasion in our movies. It hardly ever occurs without a solid dramatic motivation. It could signify tragedy or joy. But Holi is always a reason

for the plot to peer dramatically into a turning point in any film. Listing some notable Holi sequences.


1. Kati Patang: One of Hindi cinema's most memorable Holi sequences is to be found in this Shakti Samanta film. The heroine, a widow played by Asha Parekh stands apart from the Holi

celebration. Suddenly at the end of the song Khanna puts colour all over the widow's hair, a daring defiant act that implies he has proposed marriage to the widow. The colours of Holi are used here

exuding an ominous energy as the gaon wale celebrate Holi unheedful of the attack Gabbar Singh and the men are planning on them. But there is a much more evocative Holi sequence in Sholay

where Jaya Bhaduri's character, a widow in spotless white, is seen in a flashback swathed in the bright colours of Holi. The contrast is chilling.

with her husband Akshay Kumar. This has to be the most foolhardy glamour couple in the history of our cinema. Or maybe they just enjoy the thought of Holi too much to care about the wife's delicate


4. Darr: If Holi is fun it's also an occasion for hectic hooliganism. The dark side of Holi was revealed in Yash Chopra's Darr where Shah Rukh Khan with his face smeared with

colours to avoid recognition gate-crashes into Juhi Chawla's Holi bash and misbehaves with her. This has got to be the scariest Holi sequence in our cinema.


5. Phagun: Rajinder Singh Bedi's film was based on a mishap that happens during Holi. Waheeda Rehman playing a rich businessman's daughter dances in ecstatic splendor on Holi to the

song 'Piya Sangg Khelun Holi' when her economically humble husband Dharmendra sprays her with colour. She first responds with coy delight. When she sees her father frowning disapprovingly

she berates her husband, 'If you can't buy me an expensive saree what right do you have to soil it?' On Holi the wife loses her husband forever. This was the most tragic Holi sequence seen in


6. Damini: Hooliganism at the most shocking level of debasement was seen in Raj Kumar Santoshi's Damini where the family maid is raped by the scion of the family and his

friends who are high on bhang and low on morals. The gruesome rape was shot with remarkable intensity. Santoshi intercut the scenes of Holi revelery-the colours, the boisterousness, music

and dance-with shots of the young girl being ravaged. Enough to put you off Holi for the rest of your life.


7. Goliyon Ki Raas Leela Ram Leela: Colours have always been important to the cinema of Sanjay Leela Bhansali. The way he encircles the lead pair Ranveer Singh and Deepika Padukone