Wroclaw, one of the most beautiful historical cities in Poland is a city of dwarfs. Hundreds of small statues of different dwarfs decorate the streets and squares of this beautiful city. And one of the most important and famous among them is the one that commemorates Dr Harivansh Rai Bachchan. His miniature statue adorns the centre point of the city, sitting quietly just at the main square of the Old Town. Erected in December 2019, by Shri Amitabh Bachchan, Mayor of the City Wrocław Jacek and the Consul Honorary of Republic of India, Shri Kartikey Johri, the said statue has taken on a new hope.

Now, as Amitabh Bachchan returns with his warm memories to his late Father, Dr Harivansh Rai Bachchan, exactly at the time of his passing, the Great Orchestra of Christmas Charity Foundation begins its annual worldwide event. This year Wroclaw’s Grand Orchestra of Christmas Charity (GOCC) Foundation decided that Dr Harivansh Rai Bachchan’s commemorative dwarf in Wroclaw will form the centrepiece of the fundraising efforts as its central symbol in promoting the event.

The GOCC (WOSP) a charity event in the Polish calendar has as its focus the health and well-being of the most disadvantaged in our society (originally, it was for children, then children and elderly, now more general). It is a serious fundraising effort based on fun and involvement. Most of the activities in the fundraising effort are carried out by local volunteers.

The annual Grand Finale is organised by over 1700 local Collection Centres, which manage the public fundraiser and hold various cultural and sporting events locally. There are 120 thousand volunteers involved in the one-day charity event. Volunteers are fundraising everywhere, where there is an active Polish community - from the USA to Japan. On this point, the City of Wroclaw offered to help as much as possible and due to the QR Code on the famous dwarf commemorating Dr Harivansh Rai Bachchan, it will be visible all around the world, thereby aiding easier worldwide donations. 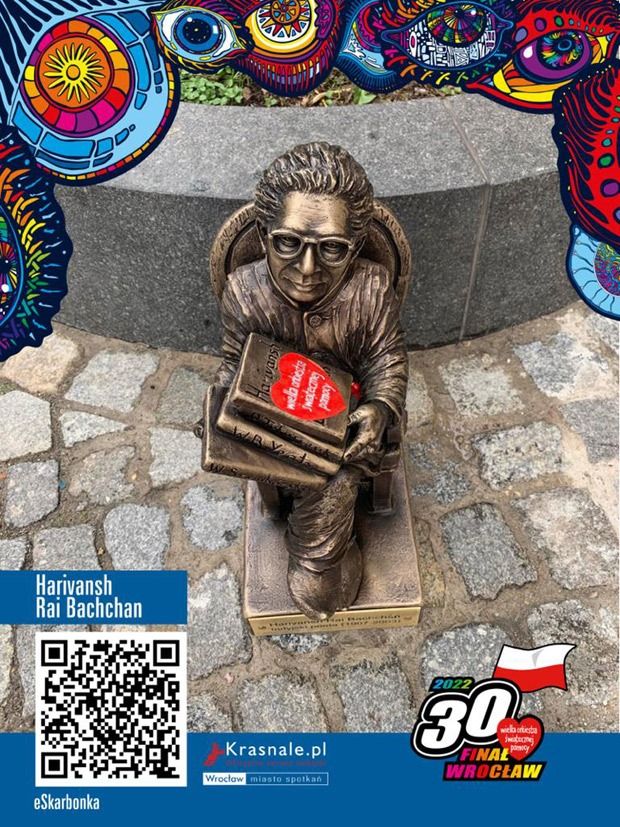 The fundraiser, known as The Grand Finale, is traditionally held on January 30th 2022. Due to the Covid- pandemic the normal activity of fundraising volunteers has been much limited. And suddenly the small statue of a famous Indian poet became a centrepiece of the fundraising efforts of Great Charitable Event. The statue bearing a QR code enables everyone from all over the world to participate in this unique fundraising activity, which will help to buy the most modern medical equipment for the ophthalmological treatment of small children.

ALSO READ:Amitabh Bachchan remembers his father Harivansh Rai Bachchan on his 19th death anniversary – “We have not even touched a hair of his contribution to the world of literature”