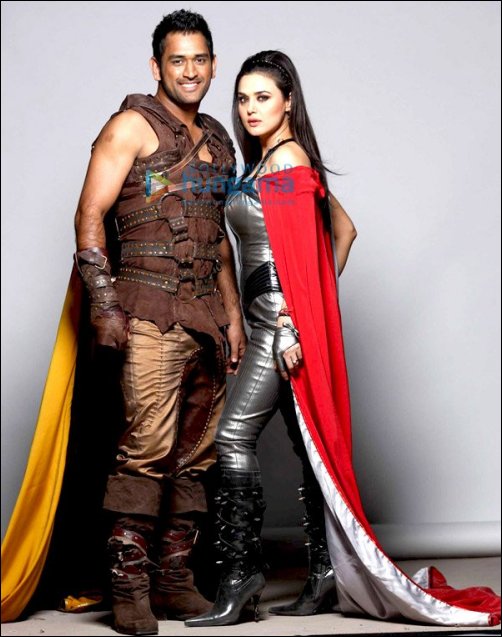 On the cricket field, they may belong to rival IPL teams but when Mahendra Singh Dhoni (captain of Chennai Super Kings) and Preity Zinta (co-owner of Kings XI Punjab) came together for an ad shoot yesterday, all rivalry was forgotten. Mahi and Preity shot a commercial for Emami Cooking Oil and if these pics are anything to go by, the chemistry between them was indeed there for one and all to see. Dhoni was dressed in a Gladiator like avatar, while PZ was given a Super-woman like get-up with a body-hugging silver dress and a red cape to go with.

While the commercial was directed by noted ad-man Prahlad Kakkar, a special photo shoot featuring the duo was done by ace-photographer Dabboo Ratnani. We got in touch with Dabboo and asked him about his experience of this special photo shoot, "It was a great experience shooting with Preity and Dhoni. They first shot for the commercial with Prahlad Kakkar and then did this photo-shoot which we will use in the ad posters. I've shot with Preity countless times before, she is very charming and a complete sweetheart to work with. As for Dhoni, this was probably the second or third time that I was doing a shoot with him. He is extremely cool, chilled out and very receptive. He was totally involved in the photo shoot, putting in his 100% effort and was very comfortable in front of the camera. All in all, we had a great time."

The commercial is likely to go on air in ten days from now when Dhoni's Men In Blue will be busy taking on the South African cricket team in what promises to be a grueling contest.