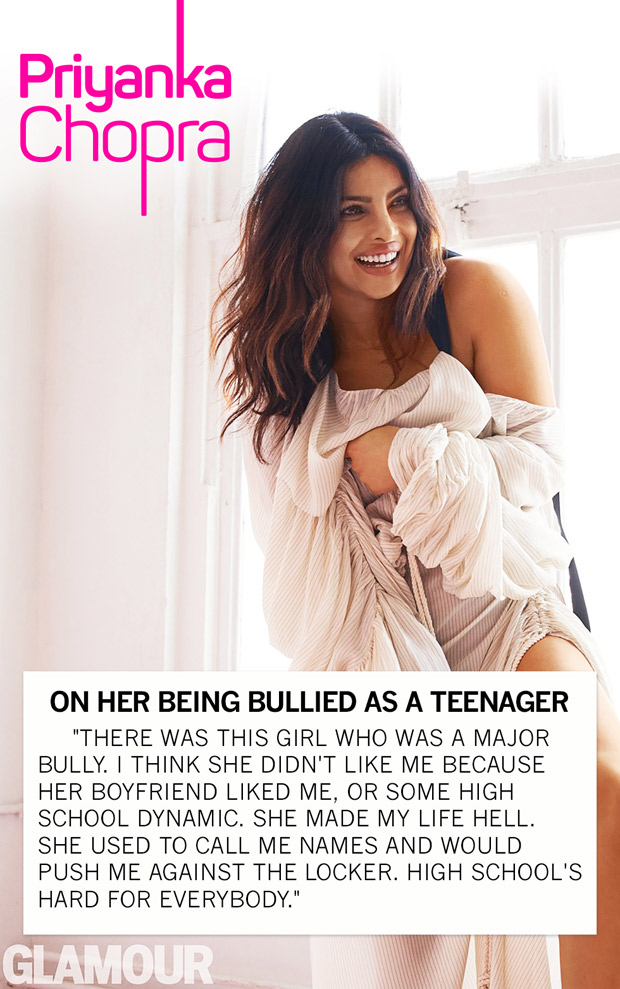 Making it big in the world of Hollywood with a dream debut like Baywatch, Priyanka Chopra aimed at making it big globally. She is on her way to fulfill her dream but that is not all. Her face has now become a regular on international magazine covers as the ‘Quantico’ star gears up for the promotions of her debut Hollywood film.

Her recent cover for the Glamour magazine also carries an interesting sneak-peek into the life of this former Miss World. In her unabashed, candid interview, we see glimpses of Priyanka as a teenager and her confessions on low self-esteem, being dark skinned and being bullied will give you a reality check. Here are a collection of some intriguing quotes that will take you through the journey of this Chopra girl from a normal teenager to an international icon.

On not getting to wear the iconic red swimsuit in Baywatch:

On her character Victoria Leeds, the antagonist in Baywatch

“What I love about Victoria is that she’s not baselessly evil. She thinks she’s just driven. There’s this amazing line in the [script]: Zac [Efron] says, “You’re such a bitch!” And I’m like, “If I were a man, you’d call me driven.”

On how she decided to join the school in the U.S at the age of 12

“I had this devious plan in my head. I sat with my mom, and I’m like, “I want to go to school here. Mausi’s OK with it.” I shuttled between my aunt and uncle. I lived in Iowa, then New York, then Indianapolis, and then Boston.”

On her adapting to new academic environment as a kid

“I used to plan what my personality would be when I got to the next school.”

On her being bullied as a teenager

“There was this girl who was a major bully. I think she didn’t like me because her boyfriend liked me, or some high school dynamic. She made my life hell. She used to call me names and would push me against the locker. High school’s hard for everybody.” 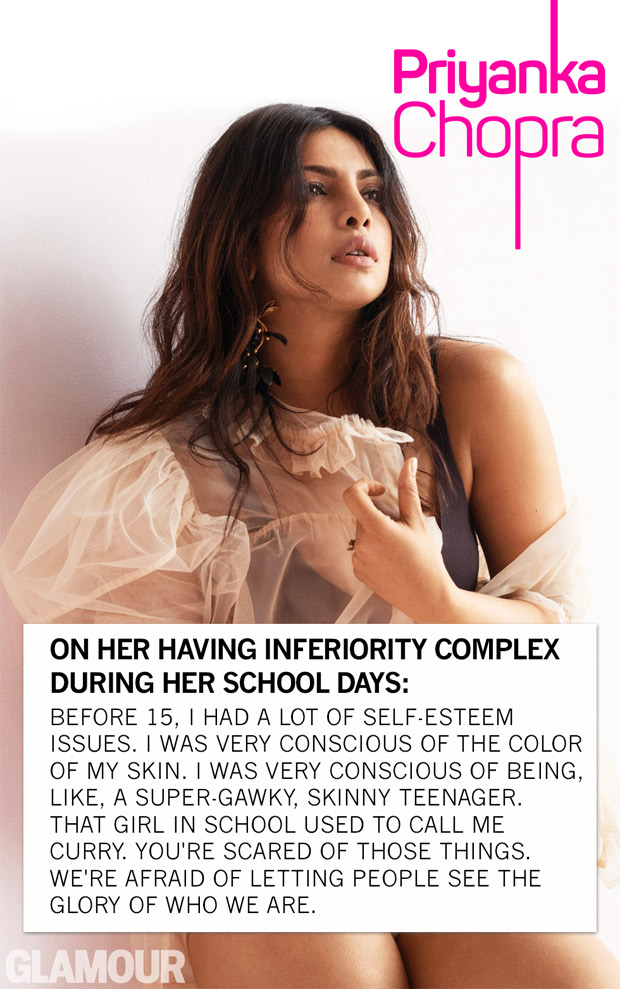 On her having inferiority complex during her school days

On how her thoughts about fairness products changed

“When I was an actor, around my early twenties, I did a commercial for a skin-lightening cream. I was playing that girl with insecurities. And when I saw it, I was like, “Oh shit. What did I do?” And I started talking about being proud of the way I looked.”

“When people used to ask me about it, or replicate what they think is Bollywood dancing, thinking that they’re being funny, I used to get offended. But now I show them the stuff we do.”

It wasn’t the failure of Quantico that she was worried about, but the pressure that followed after the success of the series

“What affected me was after Quantico was picked up. I was like, “Oh crap, if I don’t do well, people will be like, ‘Oh my God, Indian actors can’t do lead parts.’ ” I felt that pressure.”

On the disparity between women and men

“I’m still used to being paid—like most actresses around the world—a lot less than the boys. We’re told we’re too provocative or that being sexy is our strength, which it can be, and it is, but that’s not the only thing we have. So there are so many things that you will be told.”