Sonam Kapoor Ahuja is undoubtedly one of the most stylish celebrities and it has been proven multiple times as she makes sure to bring something new to the table with every appearance. Her stylist being her younger sibling, Rhea Kapoor, they have managed to make the entire industry swoon over their fashion sense. With the right amount of spark and spontaneity, Sonam Kapoor Ahuja has never failed to impress us with the way she carries almost everything she dons. Along with her on-point outfits, she also makes sure to keep her best foot forward when it comes to makeup. 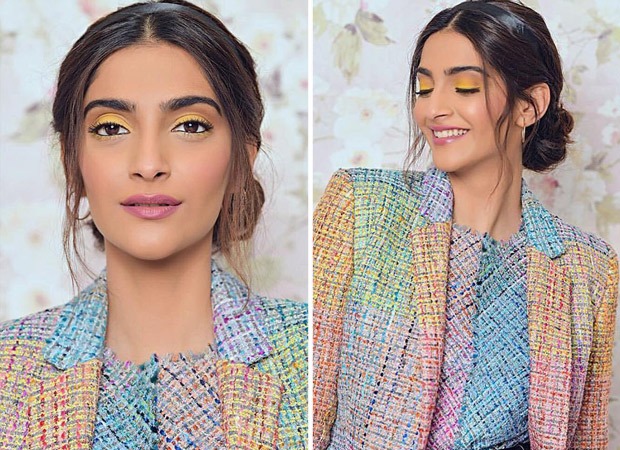 From a smokey-eyed look to basic kohled eyes to sporting an unusual bold eyeshadow, Sonam Kapoor Ahuja has experimented almost every time. Speaking to her usual makeup artist, Tanvi Chemburkar, Bollywood Hungama learned a lot of things about how Sonam Kapoor Ahuja likes to have her makeup done. Tanvi says, usually, it is Rhea who decides the kind of look she wants for Sonam, or the entire team sits together to figure out what would suit her the best. Revealing how she tried a bright yellow eyeshadow for the first time for Sonam Kapoor Ahuja for the promotions of Ek Ladki Ko Dekha Toh Aisa Laga, Tanvi Chemburkar walked us through her entire routine for the said look and here’s how you can do it too!

1. I always start by cleansing the face followed by proper skin prep. That includes moisturizing the face, eyes, and lips then prime the face, and last I use a hydrating spray.

2. When I am working on a client I always start with the eyes so that once I am I clean all the fallout from the face and then move onto working on the flawless base.

3. For Sonam’s eye look, I started by concealing the eyelids and setting them with a loose powder, give that some time to set meanwhile I fill the eyebrows.

5. Then used a neutral brown to buffer and diffuse the color above the lid disappearing into the crease.

6. Applied the same yellow combination on the lower lash line as well.

7. For a slight definition, I have added an invisible eyeliner on the upper lash line and thin kohl in the lower waterline.

8. Finished the eye look with some falsies and mascara.

9. Moving onto skin I have first color corrected wherever required and gone over with a foundation matching to Sonam’s skin.

10. After the foundation, I go over with the concealer on areas that I would like to brighten which is mainly the under eyes and the center of the forehead and chin.

11. I blend everything well using my beauty blender followed by setting it properly with a loose powder.

12. Since Sonam already has prominent and great cheekbones and jawline I don’t contour face instead I straight went it with a flush pink blush and applied it slightly upward which does the job of shaping the face and also adds color to the face.

13. I finished the look by spraying the face with a setting and hydrating spray

Now, you can spend your time trying this bold look to make the melancholic lockdown better!