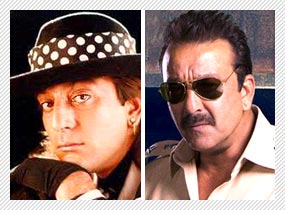 In April 1993, Sanjay Dutt was sent to jail for the first time under the provisions of TADA. A few weeks later, his Khalnayak released and turned out to be the biggest success of the year. 20 years later, when he has just been re-imprisoned, his Policegiri is all set to be released in less than a month from now.


"It is as uncanny as it gets," comments a historian, "In both instances, his visit to jail has been followed by one of his most hyped films to have been released. Khalnayak was his biggest film back then and was made by Subhash Ghai. He reached peak of his popularity along with the film. Now Policegiri is one film on which he has invested maximum number of days and effort when compared to any other film since Agneepath. Remake of Tamil super hit Saamy, it is his biggest film as a central protagonist."


For Sanjay Dutt, who is returning as a solo lead more than three years after Lamha, this was meant to be a huge comeback. Unfortunately, he won't be around to either promote or release it. Incidentally, while Sanjay Dutt played a gangster in Khalnayak, his part is being publicized as a combo of 'one good free with a cop' in Policegiri.


"Given the kind of instant buzz that the promo has managed to create, it won't be a surprise if history repeats itself, at least in the single screens, when Policegirl releases in July," a filmmaker believes.


Now it has to be seen whether it manages to cover a distance as far as Khalnayak.