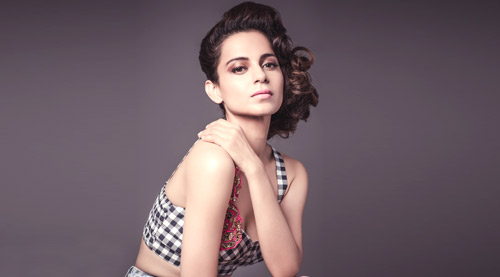 "Is Bollywood a country? That's a lame question," said Kangna Ranaut when asked, "Who is the real queen of Bollywood" at the theatrical trailer launch of Katti Batti on a rainy Sunday in Mumbai yesterday. This reaction from Ranaut received a hearty response from hard-nosed critics who lauded her uncomplicated and irreverent style which is a far cry from the sugar coated predictable responses from most of the actresses/actors.

Kangna's last release Tanu Weds Manu Returns is all set to cross Rs 150 crores. It is as big a hit as PK and 3 Idiots when you gauge it from the cost incurred in making the film. Ranaut is a rare breed of actress who's not into breast beating about women's rights and how she's the weaker sex (which in itself is a wrong notion and is promoted mostly by women themselves). She is undoubtedly the face of the movement that's galvanizing women oriented films in India. Unlike other actresses who experiment once-in-a-while and hide behind the Khan-Roshan-Kumar comfort of a blockbuster hit at other opportunistic occasions, Ranaut is willing to take
chances relentlessly. Queen started it all. She failed in Revolver Rani, didn't promote Ungli (rightly so) and Tanu Weds Manu Returns emerged as a rare entertainer which was extremely well written and didn't have a conventional stereotypical virginal Indian woman at the helm. She refused Sultan opposite Salman Khan and instead chose Vishal Bhardwaj's Rangoon.

Everyone is raving about the promo of Katti Batti (social media is also abuzz about comparisons with 500 Days of Summer) and unanimously the maximum applause is being reserved for Kangna. Imran Khan is providing an able support foil but all the best lines are reserved for Ranaut. The "Pot mein straight susu" and "serious ka mood nahin hai, time pass chalega to bol" dialogues are a rage. She hands over condoms to a prospective landlord creating a hilarious situation.

The rise of Kangna-phenomenon is significant because she's breaking the stereotypes that have always been associated with Bollywood heroines. "I'm open to time pass relationships," said Kangna at Katti Batti's promo launch. Any other top actress on being asked the same question would have simply tried to portray how she'll adhere to family values and fulfill wishes of her parents in the matters of heart. Kangna has had tempestuous relationships with the likes of Aditya Pancholi, Adhayan Suman and has also been rumouredly linked with at least two superstars. She's a rank outsider and an easy fodder for gossip, courtesy the nasty bitchy 'insiders'. Her sister Rangoli has been a victim of an acid attack. Somehow, the hardships of
life seem to have steeled Kangna from within. She's openly critical of Bollywood awards, doesn't try to be part-of-the-herd for money or for 'connections' sake, is constantly educating herself (she's a voracious reader and also enrolls herself in several short courses) and doesn't flinch from speaking her mind. Recently, she lodged a legal case against her estranged
publicist for spreading malicious rumours about her. She's willing to call a spade a spade. It is risky but she seems to be comfortable taking her chances.


There was a time when Fearless Nadia had cast her spell over the Indian film industry. Now is the time for Fearless Kangna who's extremely feminine, but yet, she effortlessly towers above all her competitors (men or women). She's emerging as an industry in her own right. Projects are being designed keeping her in mind. Rumor mills are eager to catch her unawares too. She
reportedly didn't want to meet Deepika Padukone at the Eros party for Tanu Weds Manu Returns. She will be put under microscope constantly. It remains to be seen how she emerges from this quagmire, both, as a professional as well as a person in spite of this intense scrutiny.

Kick-boxing an integral part of Salman…