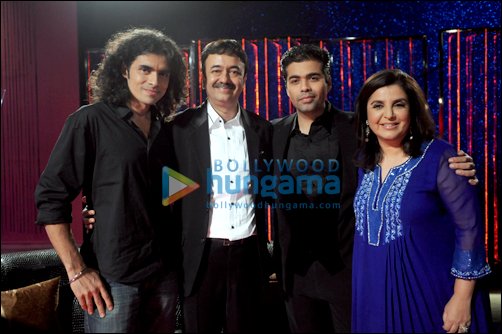 What happens when Bollywood's top four directors sit down to chat over some coffee? They talk movies, obviously! But when the cup of coffee is served in Karan Johar's den, secrets come tumbling out. This is exactly what happened when Karan Johar had 3 of today's most successful directors namely Imtiaz Ali, Farah Khan and Raju Hirani as special guests on his popular talk show 'Koffee With Karan'. The episode which airs this coming Sunday (Oct 28) promises a lot of fun and we bring you a sneak peek at what you can expect from the show.

Karan and Farah have been known to be close friends for many years and it was but natural that Karan had no reservations at all in pulling Farah's leg at every possible instance. It may be recalled that the choreographer turned director and mother of three is known to have had a tiff with Sanjay Leela Bhansali and Karan couldn't resist asking her about it. Karan even asked her about her supposed fall-out with Shah Rukh Khan (with whom she has had two huge hits in the form of Main Hoon Naa and Om Shanti Om) to which Farah replied, "I pray for Shah Rukh's success every day".

Imtiaz Ali may be a man of few words but that didn't stop Karan from asking him some tricky questions in his own inimitable style. When asked who he would like to work with again- Shahid or Saif-, Imtiaz's answer was Saif. Also when prodded who he thinks is his biggest competitor among the contemporary directors, Imtiaz took the name of Anurag Basu.

Finally it was Rajkumar Hirani's turn to face a volley of questions from Karan and the director answered it all with his million dollar smile intact throughout. Karan decided to put him in a tight spot and asked him who he considered to be the biggest Khan. Raju in his own unique and witty way replied, "Farah Khan". Hirani also spoke about the Chetan Bhagat controversy which erupted post the release of 3 Idiots.

It's seldom that four of the country's top directors come together. But when they do, as they did on 'Koffee With Karan', it makes for compelling viewing.