It's not been an easy time for people around the world. With the world trying the combat the novel COVID-19, musicians from all over are ensuring to participate in digital concerts in order to heal the world during this difficult time. Johnny Orlando, a rising 17-year-old Canadian singer-songwriter and actor, is keeping his spirits high and will participate in Vh1 India's 'Quarantunes' on April 12 at 7 pm on Instagram. "I think it’s such a cool concept and I’m glad so many artists are embracing it right now. I think it’s a really great way to connect with your audience and give people the opportunity to see you live who haven’t been able to in-person," says Orlando about connecting with people during a pandemic through social media and help them in any way possible. 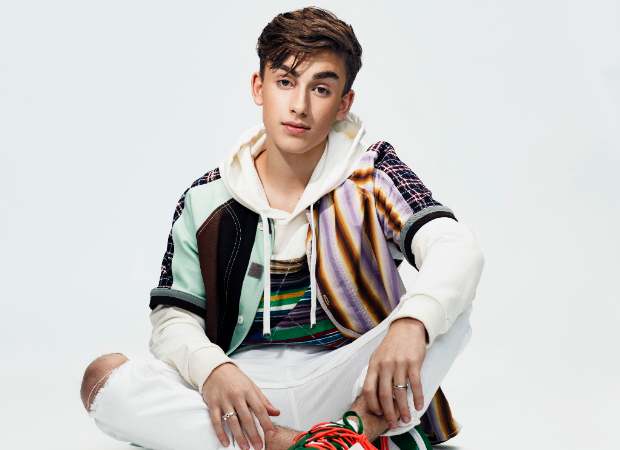 Ahead of the digital concert, Bollywood Hungama spoke to the young musician. Orlando first received attention on social media by posting covers of pop songs by artists such as Austin Mahone and Justin Bieber to his YouTube channel. He signed with Universal Music Canada on May 18, 2018, and has released singles such as 'What If' (featuring Mackenzie Ziegler), 'Last Summer' and 'All these Parties'. His debut EP, 'Teenage Fever', was released on March 15, 2019. Speaking of transitioning from performing covers to having his own songs out, Orlando says, "Transitioning from covers to original music was a really fun process. I really got to discover myself as an artist and explore my own personal sound. I’m definitely still evolving and growing as I get older though!"

His new single ‘Phobias’ was released on February 21, 2020, where he dived into his insecurities and fears. While he is young and still exploring a lot, he says it was necessary to be open about his struggles. "I think it’s important to be genuine and real with your fans so they really get to know you and connect with you on a personal level. They are such a big part of my life; they’re really just like my friends. I love talking to them about real topics and just having genuine conversations," he adds.

Johnny, like everyone else, is self-isolating amid the global health crisis. But, 17-year-old is putting his time in writing love songs. "I think it’s easiest to write love songs because there is just so much you can say. With every new experience and relationship, you learn so much and grow as a person, which means new things to write about it. It’s like a never-ending cycle of inspiration," Orlando says.

Orlando embarked on his first headlining North American tour in support of the EP, beginning on April 29, 2019, in Chicago and ending on May 22, 2019, in Vancouver.  It was supported by Hayden Summerall and Gus McMillan. So, the music industry, currently, has taken a huge hit since many have postponed their upcoming tours. Touring is a very important aspect in any artist's life. Speaking of keeping himself motivated in times like these, he says, "Touring is probably my favourite aspect of music, so it’s definitely tough right now with everything getting cancelled. What’s keeping me motivated right now is just thinking how much fun the shows are going to be once all of this is over. That’s enough for me!"

Interestingly, many artists have released their albums amid the crisis. Is there any artist that Johnny looks up to and is listening while spending time with family now? He adds, "My whole family has really been loving The Weeknd’s new album 9 (‘After Hours’). I was waiting for that one for a while, so I was really excited when it came out."

Johnny Orlando received a Juno Award nomination for Breakthrough Artist of the Year at the Juno Awards in 2019 followed by the Teen Choice Awards. He won MTV Europe Music Award for Best Canadian Act on November 3rd, 2019. So, in the coming years, fans can expect his sound to evolve. "I think as I get older my music will evolve with me. I think it’s important to continuously be growing and evolving your sound to keep things interesting. I hope as I get older I will reach an even wider audience and be able to connect with people regardless of age," he says.

Several artists are embracing different kinds of music and bringing different cultures together with their collaborations. Recording breaking South Korean group BTS collaborated with Halsey on 'Boy With Luv', Dua Lipa with K-pop group BlackPink on 'Kiss and Make Up' and Korean artist Hwasa of Mamamoo group on her latest track 'Physical', Jonas Brothers with Sebastian Yatra, Natti Natasha and Daddy Yankee on 'Runaway', J-Hope of BTS and Becky G on multilingual 'Chicken Noodle Soup', among many others have released some major hits in 2019 and 2020. They say music transcends language and it has seen amazing responses. When asked how he sees this shift in music, he says, "I think it’s honestly so cool and I’m really glad that western culture has embraced different music in such a big way. I was first introduced to K-pop around two years ago, and I was blown away by how cool and different the production and style was. I’m also a really big fan of Latin music, even though I can’t understand a word, I just love the vibe. I think that’s what is so cool about music; you don’t have to speak the language to enjoy it."

Is there anything that he is looking forward to professionally or personally once things get back to normal? "I am definitely excited to get back on the road and tour again so I can see all of my fans in person, and also of course get to see my friends again," Orlando signs off.