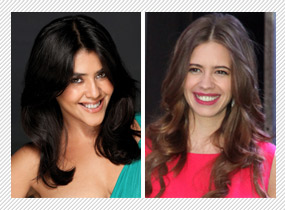 There may still be suspense around whether she is or isn't a 'daayan' in the forthcoming supernatural thriller, Ek Thi Daayan. However for Kalki Koechlin there was a 'horrific' gift awaiting her as the clock struck 12 in the midnight. Even as she had just started accepting wishes for her birthday, the first trailer of her film was unveiled. This was something that Kalki was least expecting.

Of course she had an idea that Ek Thi Daayan would be unveiled along with Matru Ki Bijlee Ka Mandola. However, she didn't have a clue that Balaji would pre-pone it by more than a day and first launch it online so that it coincides with the birthday of her leading lady. This was the best gift she could get," informs a close associate of the actress. The just released promo showcases Emraan Hashmi as an illusionist with the three women being introduced, each of which could well be a 'daayan'.

While Konkona Sen Sharma and Huma Qureshi come on the screen first, it is Kalki's arrival at the end of the trailer, which changes the entire graph of the communication. "Kalki is amused because so many have already started addressing her as a 'daayan'. Even though she is keeping mum about her role in the film, those giving her birthday wishes have been flooding her with queries around her part as a 'daayan'. She never imagined that Balaji's gift would bring such a 'horrific angle' to all the wishes that were coming in for a long life ahead," quips the associate. Ek Thi Daayan releases worldwide on April 18.