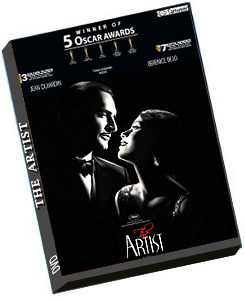 They say 'Silence is Golden' and nothing depicts this statement better than the silent award-winning film The Artist. After winning 5 Oscars, 3 Golden Globes and 7 BAFTA awards, Michel Hazanavicius' The Artist finally releases on DVD. For those who have missed watching it in the theatre, The Artist is a wonderful tribute of sorts to the silent era of movies and the advent of talkies. Despite being a black and white, silent film (for most parts) the film holds your interest completely proving yet again that 'Actions speak louder than words'.

The film begins in 1927 in Hollywoodland (the original name for Hollywood) where George Valentin (Jean Dujardin) is a superstar of silent movies. Girls go weak in their knees seeing him, the paparazzi can't seem to get enough of him and life is a bed of roses for the charming and self-obsessed star. Enter Peppy Miller (Berenice Bejo) a free-spirited young girl who auditions for the role of a back-up dancer in one of Valentin's films. George immediately falls for her charm and a sweet and subtle romance begins to blossom between the two. However things take a complete turn 2 years later in 1929 when the studio bosses at Kinograph studios decide it's enough of the silent movies and its time to explore the talkies.

George being the self-obsessed, egoistic star that he is refuses to change with the times and laughs at the idea of talkies. When the studio bosses show him the door, he challenges them that he doesn't really need any studio backing and could make his own film. Peppy meanwhile slowly and steadily begins to climb the ladder of success graduating from small bit roles to full fledged lead roles in talkies. What happens post that to George and Peppy's careers, romance and inter-twined destinies is what forms the crux of the film.

Director Michel Hazanavicius takes us to a world of silent movies which most of us may have never experienced. His visualization of the era gone by is remarkable and his story-telling simple yet effective. The film is devoid of any dialogues yet the superb background score coupled with brilliant performances from the lead pair hold your attention thoroughly. Jean Dujardin is the star of the show delivering a flawless performance as the egoistic and self-obsessed superstar George Valentine. Without a single dialogue, Dujardin uses his eyes and expressions to convey a myriad of emotions. Berenice Bejo is like a breath of fresh air and sparkles in her role of the vivacious Peppy Miller. Among the supporting cast James Cromwell as Clifton does a good job. Special mention of Uggie the dog who is simply adorable. The production value and attention to detail gone into creating the 1920's and 1930's has to be seen to be believed.

The film's duration is 100 minutes

Unfortunately The Artist DVD doesn't contain any special features which is a bit of a let-down.

The Artist is a master-piece and deserves every possible award and accolade that came its way. Albeit best meant for a big-screen viewing experience, the film is nevertheless a must-watch for those who have missed watching it in the theatre. Only wish the DVD had included some bonus features giving us a sneak peek at the making. Nevertheless on the strength of the film alone this one is worth having in your DVD collection for keeps.