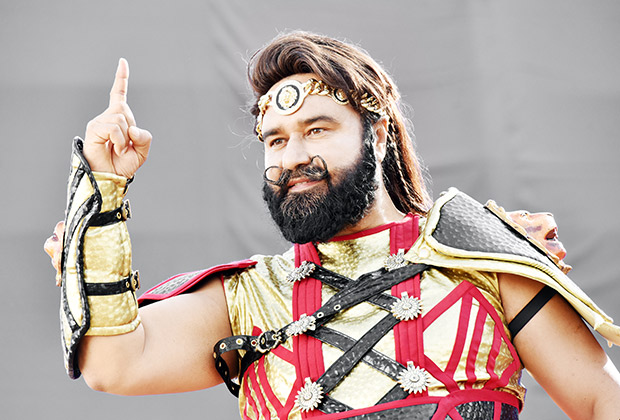 We've had several super hero films made in our film industry; they've done quite well too. Enough has been spoken about how these superheroes act as a shield to society.

But do we have a reel and real superhero combined into one?   It is none other than the Giant International Awards and Dada Saheb Phalke Award recipient Saint Dr Gurmeet Ram Rahim Singh ji Insan. He's a human with no magical wands or powers, but has a lion size heart to help those in need even at the eleventh hour of the day. For Guruji, fighting for equality thus gaining equal rights and respect for women is his priority.

This time, it is the attitude of young men in particular that his latest film MSG The Warrior LionHeart, intends to change. Talking about the pretext of the film Saint Dr. MSG adds, “If you are a real man, show your masculinity by protecting women and not by assaulting them. If society takes this message home and follows it, India and the world will be heading for better days.”

On the social front, amongst the 126 humanitarian causes led by him, Saint Dr.MSG started off the Cleanliness drives in 2011 mobilizing millions of supporters to clean up 29 major Indian cities. Mumbai also received a facelift in October 2014 by 3.5 volunteers led by the Saint who swept the city and installed hundreds of bins. This Gandhi Jayanti, Saint Dr.MSG is wielding the broom in Jaipur along with lacs of inspired followers.

Media persons often express surprise at the wide range of his humanitarian campaigns and the endless list of his talents. Saint Dr.MSG shrugs this off modestly saying, “It is God who is the doer, his meditation gives me the power, so can it to everyone.” The best part is that he teaches the meditation for free to all. This is whom we can call a Real Life Superhero and Super Human and truly- The Warrior Lion Heart, who also teaches you, how to become one.

"It is a tougher sport and has tougher…

Watch: When Alia Bhatt schooled the…