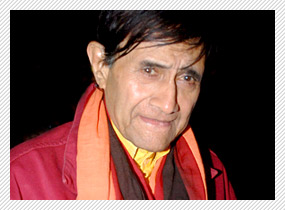 young 90, we continue to celebrate a man who seemed to have drunk the elixir of perennial

him than for most actors in Indian showbiz. One could dial his landline number and he would pick

up the call and drawl, "Who's calling?" - it was as easy as that to contact a man who was

nothing less than one of the living legends!

When we met for the first time, in far-off 1997, he strode around a rather small desk to shake

hands - it was a strong grip that showed a genuine happiness in adding a new acquaintance.

He then said, "Well, we are friends now. You can drop by anytime for a cup of tea and a chat.

But something very important and urgent has come up. I need to go to the laboratory in town for

my new film Main Solah Baras Ki. Listen, let's do one thing. You tell me the time and day

and we will meet for an interview then instead of today!"

After we had confirmed a new appointment, he came down two floors to see me off, being alongside

me in the beginning and half a flight ahead when I reached the ground floor! As I walked out of

Anand, I felt an extra spring in my step - though my interview had not happened!

This was the effect Dev Anand, then 74 years old, had on people! My last meeting with him was

equally memorable: in the midst of a crowd of media persons and friends, clicking his pictures

or wishing him luck at the premiere of the colorized version of Hum Dono, he stopped when

I went forward. "Let me know when your story is appearing!" he reminded me about the recent

interview I had done with him, and walked past.

That show ended well past two in the night, but Dev-saab (as he was affectionately known)

was there to see off the last of his guests (including major stars) before he exited the venue!

The conventional word "energetic" seemed too tepid a word to describe this human dynamo!

Devdutt Peshaurimal Anand was a super-achiever from day one. His father was a lawyer, a scholar

and linguist, and his elder brother Chetan Anand was an all-rounder. Dev Anand completed his

B.A. Honours in English and wished to do his Masters, but could not because at that point, his

father had financial constraints. Ambitious to the core, he told his dad (who wanted him to take

up a job in a bank) not to worry about him and that he would find his own way. "I was ambitious,

I wanted to be somebody!" he explained years later.

From his arrival in Mumbai in July 1943 to his first shot for his debut film Hum Ek Hain,

which was canned in Pune's Prabhat Studios exactly two years later, Dev did a lot of theater,

names like K.A. Abbas and Balraj Sahni. Chetan had meanwhile arrived in Mumbai, made the arty

Neecha Nagar that won international acclaim but flopped, and was trying to get another

Hum Ek Hain flopped, and so did Dev's next two films, Birha Ki Raat and Aage

Badho. And then came the turnaround with Ashok Kumar's Ziddi, which was a huge hit.

playback voice in the film - and till Sacche Ka Bol Bala in 1989, two years after

Dev was awarded the Padma Bhushan in 2001 and Indian cinema's greatest honour, the Dadasaheb

Phalke award in 2003. In 2007, he wrote his autobiography for Penguin, a straight-from-the-heart

tome named 'Romancing With Life'. He was also one of the earliest Indian names to act in English

films - the English Guide was made before the Hindi hit, and he later acted in The

Evil Within with Zeenat Aman.

Dev had an unerring ear for music in his movies, though after S.D. Burman's death in 1975, his

inspiration seemed to die out and he could score only intermittently (Jaaneman, Des

Pardes). However, at the age of 82, he did what seemed magical - he wrote (and vocally

rapped) the theme song of his film, Mr Prime Minister, simultaneously in Hindi and

English versions, with the same meanings intact in both!

And then obviously, he was the man who presented new talents galore to cinema.

Dev Anand was Columbus to so many new or untapped talents, beginning, surprisingly, with his

elder brother Chetan Anand, who had to find his footing again after the flopping of Neecha

Nagar. With the advance money he got for two films, Dev and Chetan started their own

banner, Navketan, and got Chetan to direct Afsar, which released in 1951. He later had

Gyarah (1957). Both brothers went on to make an immense name in their field, albeit in

Pujari (1970). Next up was his son Suneil Anand, whom he introduced as actor in Maiu Tere

Outside his own family, Dev was to mentor a bevy of talents. Lyricist Sahir Ludhianvi, who had

bhajan singer in films to a top name in modern playback. The film introduced Dev's

friend, Guru Dutt, as a director, a promise made by Dev and Guru to each other at a street-side

Pune cafe that the man who made it first would help give a break to the other.

The trend continued throughout Dev's career, right up to the youngsters he introduced as lead

actors and also composers in his latest films. There were many others behind the scenes as well,

in fields like cinematography, art direction, editing, sound and more.

Amit Khanna, a production man in Navketan, was among Dev's standout protÃ©gÃ©s - he not only wrote

lyrics for some Navketan films but also turned producer with Dev's backing in Manpasand.

Amarjeet, a Navketan assistant, went on to produce films like Teen Devian, Duniya,

first noticed by Dev Anand, who helped him get a break as director in Milap and as

discoveries on-screen along with Richa Sharma (later Sanjay Dutt's wife) and Tabu, both in

Dev had an unshakeable funda - look ahead at all times. In the '80s and beyond, he did not act

in or make a single hit, but always maintained that for him, it was all about the sheer joy of

writing, directing and acting. "If the people like what I am charged about making, great,

otherwise, I just move on!" Newspaper headlines and incidents reported on television inspired

him, and he would say, "When I wake up each morning, I know that I am going to learn a few new

things before going to bed that night!"

The indefatigable actor was planning to write more books too. "My principle was the same - my

book should make the reader want to turn to the next page!" he said.

Hindi cinema - Raj Kapoor and Dilip Kumar being the other two. As he once put it, "As a creative

artiste, I have been acting, making films, writing, globe-trotting and more. Acting in movies

has never been just a 9 to 6 job for me. I have risked my earnings and put them back into the

film industry. I have made 36 films, 80 per cent of which have made money, and invested in this

studio. But yesterdays are best left to historians, though they have played a beautiful role in

my life. If I remained there, I would stagnate. I love being with youngsters rather than my

generation. The mind must progress!"

And who knew that better than young, young Dev Anand?