Deepika Padukone and Ranbir Kapoor are ex lovers, co-stars, industry favourites and more. Together, they exude this cracking chemistry which is too hard to ignore. One can not help but fall totally and inexplicably in love with Ranbir-Deepika. Despite breaking up, they share warmth and friendship which is all goals for their fans. Their last film together was Tamasha directed by Imtiaz Ali and though it got mixed reactions, its lead stars chemistry got a lot appreciated. Yeah, the two set the screens on fire with their Tamasha and we could not ask for more. Recently, their clip from an event they attended together got viral and while they grooved to their common dance numbers from Yeh Jawaani Hai Deewani and Tamasha, the Kapoor scion made sure his ex lady love dances to the chartbuster Channa Mereya! Well, note the irony of this, will you? 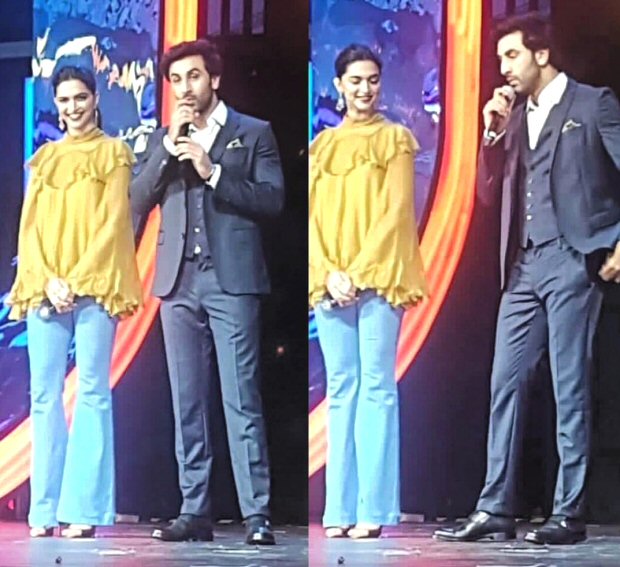 Often, the stars are asked how did they manage to maintain such warm relationship considering their break up was pretty rough. Deepika has admitted publicly that she was very hurt by Ranbir’s actions which led her to break up with him and she has consciously maintained the friendship though it was not the most natural thing to do. Well kudos to them for showing this level of maturity and not robbing us of watching their amaze chemistry on screen!

The show was hosted by Karan Johar and Riteish Deshmukh and one can assure that it would have been nothing short of entertaining. There is one more good news to Ranbir – Deepika fans. The two are coming together for Manish Malhotra’s Mijwan Fashion Show soon. Last year Deepika was the showstopper for the same show with Fawad Khan.

Karan Johar plays a fun game with Ranbir and Deepika at the Asian Paints event - 2 pic.twitter.com/J9ULBpae79

Karan Johar plays a fun game with Ranbir and Deepika at the Asian Paints event pic.twitter.com/w6up539GyP

Ranbir Kapoor and Deepika Padukone on stage shaking a leg to #LungiDance at #GalaxyOfStars event by Asian Paints. pic.twitter.com/1AAxxf4YYG