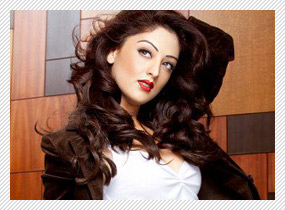 She earned a debut for herself which most newcomers would dream of. Even though Isi Life Mein wasn't directed by Sooraj Barjatya, it had a Rajshri name attached to it. After garnering some good attention for herself with the film, which was soaked into traditional Barjatya emotions, Sandeepa Dhar was seen in a cameo in Dabangg 2. A year and a half later, she is now being seen in Heropanti where her performance is said to be the surprise package.

It has been almost two and a half years since you were seen in a major role in Isi Life Mein (2010). Where have you been?

From 2011 to mid-2012, I was in Australia where I was touring with a company for a musical play. Not many are aware that I am predominantly a dancer first; acting just happened. Hence, when the opportunity to do a musical came my way, I immediately grabbed it as it couldn't get better than that. It also gave me an opportunity to travel around the world and do what I love the most.

You did a cameo in Dabangg 2 though.

When I returned to India, I thought it would be fun to do this cameo. Then one thing led to another and Heropanti is releasing now. In fact I have a couple of other releases happening this year as well. They are titled Golu Aur Pappu and Global Baba.

One expected you to be much more aggressive after Isi Life Mein.

I felt it would be good to disconnect for a while. See, I never aspired to be an actor. Rajshri film just happened and it took away an entire year of my life. I just felt it would be good to disassociate myself and re-evaluate things by doing something else for a bit. I am always very picky about the kind of work I do and I want to give my 100% instead of doing things for the heck of it. When Dabangg 2 came, I was excited as it was something I wanted to do. It was a film I wanted to be associated with, irrespective of the length of role.

Did you ever fear getting typecast?

Actually, I didn't really think that way but now that you are saying, I think I should have thought about it. I don't think the industry is so stereotypical these days; they don't typecast like it use to happen in past. Things have changed now.

So what is it that attracted you to Heropanti?

I am always fascinated when a female gets a solid role to play in a film. Firstly, I get attracted when there is something meaty to do in a film. Secondly I wanted to work with Sajid Nadiadwala. I think his is a great production house. After Dabangg 2 screening, Sajid asked Arbaaz for me. When someone as big as him shows faith in you and gives you a role which is so performance oriented, you want to do your best and prove him right. Dabangg 2 was a cameo, Heropanti is far more important role.

Can you please elaborate?

Well, obviously I can't really say anything because how I feature in the story kind of tells you what the film is all about. I will just say I am the reason a major twist happens in the film. It's a desi film based in Haryana. My look is Indian with a 'desi' flavour to it. It's not very glamorous.

In a way you were the senior-most on the sets since Tiger Shroff and Kriti Sanon do not have a release to their name.

(Laughs) Yeah, I used to tease Tiger about that. The two of us have so many common interests. It was good fun hanging out with him. As for Kriti, she and I have a lot of scenes together. I have known her from our modeling days. We have also done a few ads together. She is really sweet and talented. Also, she is mind blowing for her first film. It was good fun to have old friends on the set together. In fact, what really worked was the fact that the average age of crew on sets was 24-25 years. So there was super energy out there. When everyone is excited about the work that you do, it is always fun.