Last Updated 23.09.2020 | 5:52 PM IST
feedback language
follow us on
Home » News » Bollywood Features News » Bollywood News CUTE! Salman Khan doing this mischief with Ahil is the most adorable thing you will see on the internet today 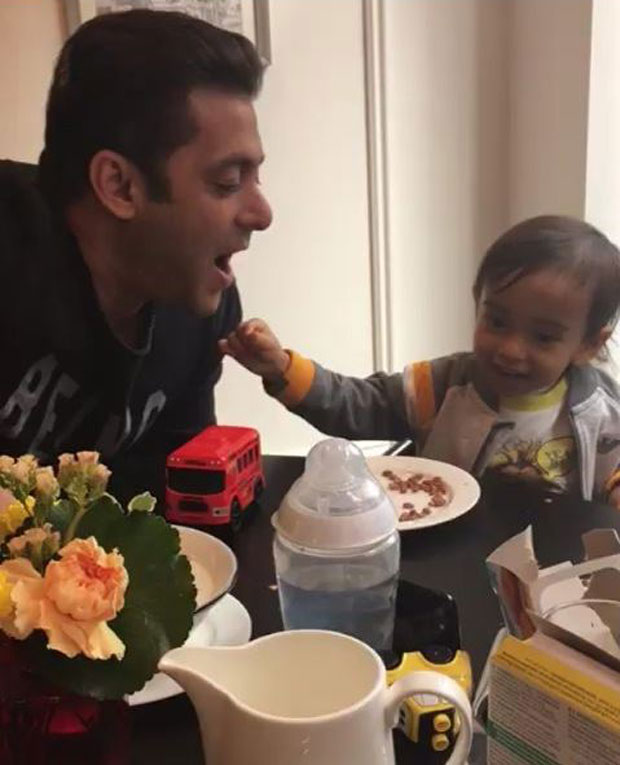 Salman Khan is a proud mamu [uncle] and proudly so. The actor has time and again been seen showering love upon the little son of his sister Arpita Khan. Ahil Sharma has become the darling of the Khan household as every member is often awestruck by his adorable shenanigans. While it is generally Ahil’s mother Arpita Khan who often shares pictures and videos of her son, this time around Salman Khan took the initiative and shared this cute moment the two exchanged during breakfast.

Salman Khan took to Instagram to showcase his camaraderie with nephew Ahil Sharm as the two were feeding each other at the breakfast table. The superstar is spending some quality time with family in London and that is when the video was recorded. While he is not the one who elaborately captions for his posts, he shared two videos of his moment with Ahil saying, “With Ahil in London over breakfast.”

On the other hand, Salman Khan is currently wrapping up a major schedule of his film Tiger Zinda Hai in Abu Dhabi along with co-star Katrina Kaif. The actor will also be a part of the forthcoming film Race 3, which will be directed by Remo D’Souza this time. Besides the two of them, the actor will be collaborating with Atul Agnihotri for Bharat as well as is planning to bring back the franchise of Dabangg next year.