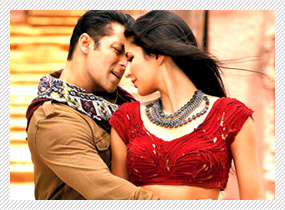 It's time to end all the speculations. Ever since Ek Tha Tiger was launched, there were various numbers that were thrown in around the film's cost. While some said it was made in a cost effective manner and was wrapped up in Rs.60 crores, a few even pegged it as high as Rs.90 crores. However, we have managed to dig into our sources and the number has been revealed at a very high, though manageable, Rs.75 crores.

Confirms our source, "Yes, that's the cost in which Ek Tha Tiger has been made. It also includes Salman's fee. This is indeed the most expensive film produced by Yash Raj Films and is also the costliest that Salman has featured in."

To be fair to the film, Ek Tha Tiger was also meant to be a mega project. However, given the fact that Chopras have been making films for decades now and hence know ways of cost saving, Rs.75 crores is a huge amount by all standards. Even if one considers the fact that in all probability Salman Khan has taken home Rs.25 crores, just the making and remuneration of other cast members comes to Rs.50 crores.

"You have to take into consideration the fact that this is a film which has been shot in 3 continents, 5 countries and 9 cities. The costs are definitely expected to be high since a large number of foreign crew members had to be paid. In fact the very opening scene which has been set in Iraq cost a bomb for Chopras. Of course it would show on screen", adds an insider.

What needs to be seen now is the kind of numbers that Ek Tha Tiger generates to just recover this amount. Though satellite, music and other rights would manage to recover a chunk of it, a huge amount would still have to come through theatrical revenues.

"Well, crossing Rs. 100 crore mark would be a cakewalk for the film. Once that happens, Ek Tha Tiger would be in a profit zone. Whatever comes after that is a bonus", adds a trade source.

However, given the mammoth expectations that everyone has from the film, one wonders whether Khans and Chopras would be pleased with just a bonus or does their 'dil maange more'.