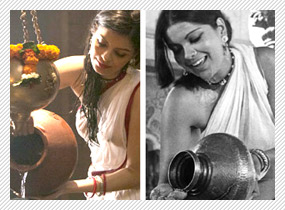 Cleavages which have been an integral and almost essential part of Indian cinema since Bindu and Padma Khanna heaved their way into the bosom of fame, may well be things of the past.

According to sources from the Censor Board Of Film Certification (CBFC) the censor board, so far very liberal with cleavage display, has decided to clamp down heavily on the same.

The first casualty of the newly-discovered regard for a woman's modesty in the upper half of her torso is new actress Rupali Krishnarao who plays a prostitute in Asshu Trikha's Koyelaanchal. Her cleavage has been blurred by the censor board at several places where the board members found the flesh display too ample.

Considering how much cleavages are part of our Bollywood culture director Trikha can't stop grinning over the sheer hypocrisy of this sudden flash of modesty. "The cleavage was blurred as per the censor board's instruction. I argued with them saying cleavage is an integral part of Bollywood culture. Besides my heroine plays a prostitute. 36 years ago in Satyam Shivam Sundaram Zeenat Aman had displayed a lot more than cleavage in a temple sequence."

Besides that, Trikha argues his heroine's anatomy was not open to kids. "My film is for Adults Only. And adult audiences are mature enough to handle some cleavage. But I saw no point in arguing beyond a point. I just blurred the blouse."

But Asshu says he has no complaints against the censor board. "They have become cautiously advanced as opposed to defensively regressive."

In the meanwhile a sequence in Ananath Mahadevan's The Xpose showing a starlet in a transparent white saree has been trimmed by the censor board.

“We knew we were going too far,” says Ahmed…