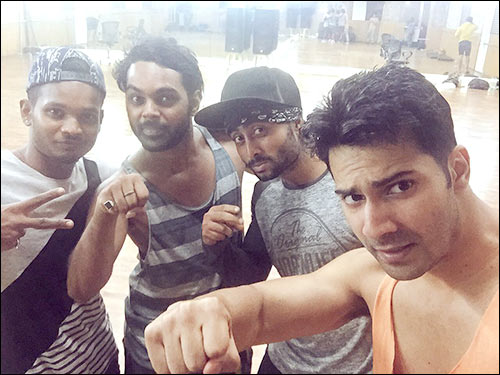 Varun Dhawan is busy promoting is upcoming action flick Dishoom in which he has collaborated with his brother Rohit Dhawan for the first time.

Readers may recall that the first song from Dishoom 'Sau Tarah Ke' released last week. The peppy number has soon become a fan favourite. Recently, Varun shared a photo with some assistant choreographers as they geared up to shoot a new song. The new song has been choreographed by Ahmed Khan and assisted by Dance India Dance alum, Prince Gupta. Varun wrote, "#tohdishoom. Shooting with @AhmedKhan01 sir and back with @i_m_princegupta. Can't wait to shoot this. #crazydancing."

Assistant choreographer Prince Gupta too shared his excitement on working with Varun Dhawan again. Earlier, he had worked with Varun on the hit tracks 'Saturday Saturday' from Humpty Sharma Ki Dulhaniaand 'Jee Karda' from Badlapur.

In Dishoom, Varun Dhawan is playing a task force agent Junaid Ansari who teams up with John Abraham's character Kabir Shergill in a 36-hour manhunt. Directed by Rohit Dhawan and produced by Sajid Nadiadwala, Dishoom is set to release on July 29.

Varun Dhawan thanks Jacqueline Fernandez for…