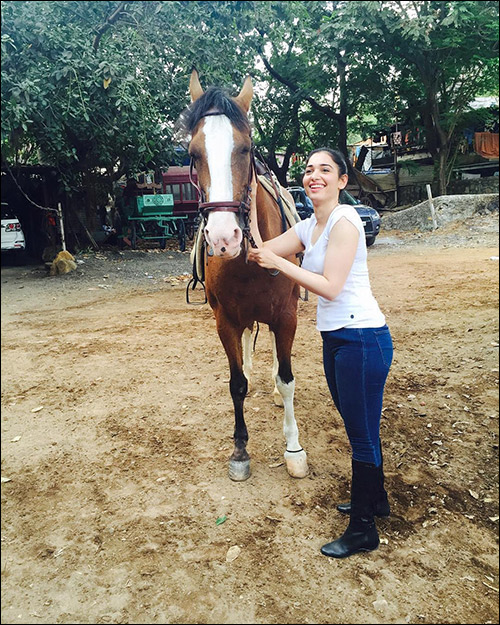 Followed by the massive success of the fantasy action film Bahubali, yet another installment is on the cards as it is all set to unleash the mystery behind the climax of the first film. Amidst the actors who have already started preparations for Bahubali 2, Tamannaah Bhatia too is busy with the same.

Tamannaah Bhatia has kick started her training for Bahubali 2 as she has been learning horse riding for the film. Talking about the same on Instagram was the actress, who further posted, "Meet my new friend #poojathehorse #horseriding lessons @baahubalimovie , she's a beauty". In fact, we hear that the Bahubali actress has been learning horse riding from Jeetu Verma who also taught the same to Kangna Ranaut for Rangoon. Stating that she plays a warrior in the film, Tamannaah revealed about her horse riding learning experience and about her two sessions adding that her co-stars too will be undergoing rigorous prep schedules for the film. While she has time only till July before the film goes on floor, she has been dedicated enough to attend these hour and half sessions every day. For her action packed role, she will also be required to do sword sequences in the film for which she will receive professional help from stunt choreographer Lee.

Directed by S.S. Rajmouli, Bahubali 2 stars Prabhas, Rana Daggubati, Anushka Shetty among others and is slated to release April 14, 2017.