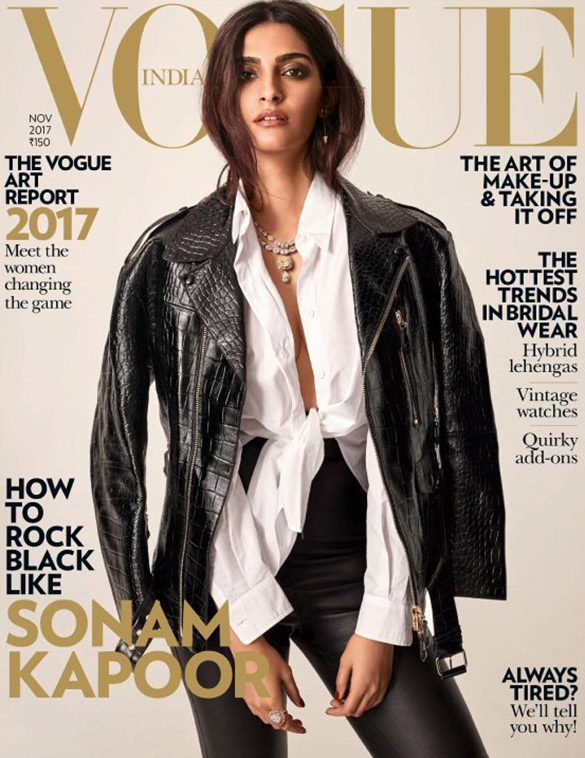 Sonam Kapoor is known for her style statement. From red carpets to photoshoots, the actress knows how to carry herself and brings some new interesting fashion choices to the limelight.

Now, Sonam Kapoor has been featured in the November issue of Vogue India cover. When India's fashion bible decided to introduce readers to the women who've changed the game in art and fashion with the Vogue Art Report, it comes as no surprise that they chose the country's poster girl for fashion to feature on the cover of the issue.

Sonam Kapoor, the de facto sartorial queen, shows us the magic of black- the classic color that has the versatile ability to be sexy and provocative, yet powerful and edgy. On the cover, the actress is showing her elegant and fierce side, sporting looks from Dior, Cartier, Cavalli, and Rochas.

Sharing the cover, Sonam Kapoor captioned it, "t's always a pleasure working with @vogueindia! Each experience is filled with joy, creativity and of course - the most fabulous clothes. Styled by @anaitashroffadajania in @tods x hair by @jeromehair / L’Atelier NYC x @andrea_tiller / The Wall Group."

On the work front, Sonam Kapoor is currently shooting for Veere Di Wedding alongside Kareena Kapoor Khan, Swara Bhaskar and Shikha Talsania. Directed by Shashanka Ghosh, the film is slated to release on May 18, 2018.

MAMAMOO’s Hwasa looks breathtaking on the…