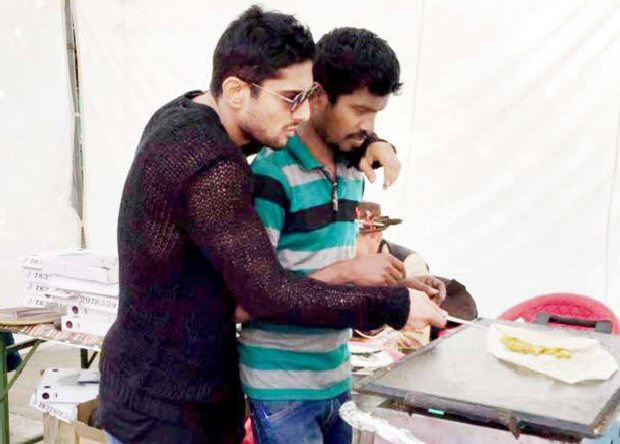 Prateik Babbar may have stayed aloof from Bollywood for a while but he is exploring his love for acting in other streams like theatre. Amidst all of that, he also took out some time to visit the Dharamshala Indian Film Festival at McLeod Ganj.

However, it wasn’t watching films that Prateik Babbar was busy with during the festival. The actor collaborated with a certain man named Murugan for his food-stall at the festival. Last year, Prateik had come across this food stall owner during the premiere of his film Urmika at DIFF and he had a rundown shack. The actor had decided to join hands with him then and had started a similar food-stall at the festival along with anglicizing the name for the shack from Murugan to Morgan. The pastas and pizzas that were introduced last year turned out to be an instant hit and this year he decided to add South Indian dishes to the menu.

Here’s a glimpse of Prateik Babbar trying his hands at making dosas. The other dishes on the menu this year included medu vadas among others. Revealing about the experience, Prateik was thrilled with the way the stall was getting a positive response and he also spoke about how Naseeruddin Shah and Ratna Pathak Shah who were at the festival visited the stall and loved the food.

Besides making food, Prateik, we hear was also more than happy to oblige to his fans’ requests of clicking pictures with them during the fest.