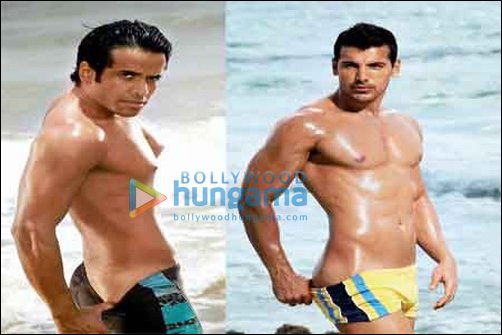 In his next film Kyaa Super Kool Hain Hum, Tusshar Kapoor will be seen emerging out of the sea in swimming trunks and flaunting his butt, a la John Abraham in Dostana.

Tusshar worked really hard to get his body in shape for the scene. He went through rigorous workouts and strict diets. He was on a high protein diet and eliminated sugar completely from his diet for almost 2 months.

In the film, Tusshar plays a struggling actor and does a spoof on John's famous entry scene from Dostana, in order to impress his lady love Neha Sharma. Tusshar says that he wasn't embarrassed at all while doing the scene, in fact he was excited about showing off his derriere.