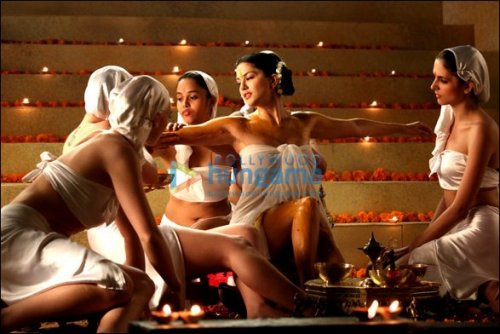 The past week has been pretty revealing about the film Ek Paheli Leela. The makers of the film recently launched the promo that feature Sunny Leone as the lead actress. Now we hear that after dancing to 'Dholi Taro Dhol Baje' and donning a special Victoria's Secret lingerie, Sunny will be seen bathing in 100 litres of milk for a sequence in the film.

In fact the said scene was recently shot in the cold chilly winters of Rajasthan. This particular scene is of the present life, and we hear the milk was mixed with hot water to dilute it, and Sunny eventually had few rashes as well but still continued to shoot and did not stall it.

Produced by T-Series and directed by Bobby Khan-, Ek Paheli Leela is said to be a musical featuring nine songs.