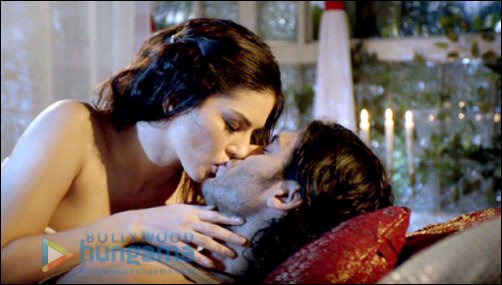 After the rip-roaring success of 'Baby Doll' and 'Chaar Botal Vodka', Sunny Leone's tender love-making number in Ragini MMS-2, is set to create a new round of waves. Being pegged as the hottest make-out number, 'Maine Khud Ko', rendered by Pakistani singer, Mustafa Zahid, was too hot for the Censors to handle.

The steamy sequences between Sunny Leone and debutant Sahil Prem had to be toned down for television, though a portion of the unrated version is now out online. It is believed that the video went through multiple rounds of changes lasting over a fortnight before the CBFC cleared it for broadcast.

"It is true that the song took long to censor. Several changes had to be made to the video to get it on to television," confirms Tanuj Garg, CEO - Balaji Motion Pictures. However the good news is that the song will be seen in entirety in the film.