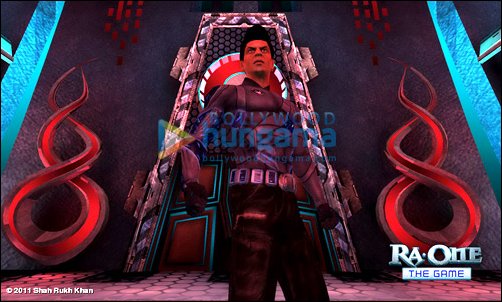 Ra.One is by far Shah Rukh Khan's most ambitious project till date and the actor is removing all blocks to make it larger than life. Just recently, the film was in news for the cameo shoot that Sanjay Dutt and Priyanka Chopra did for film. If that wasn't enough, there's also a PS3 game developed which is based in the film.

Tweeting about his Ra.One - The Game, SRK says, "sorry to go on and on about the sony ps3 game but i am so taken in by it. yippeee my own personal video game...though the hair is little pointy... will put up shots of other actors too, soon". Above is the image of SRK's character G.One from the game.

Further, the excited star posted another image from the game.

Known for their superior gaming quality of PS3 and with the sleek look that Ra.One- The Game has, we hope the game play and user ability of the game will be as smooth as most of the other titles.