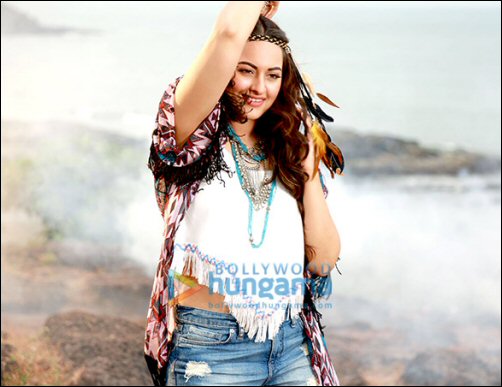 Just a few days ago we had reported that Sonakshi Sinha is gearing up to debut as a singer with her own single. The actress decided to not just lend her voice but also star in the music video of her debut track. And now, we got a glimpse of Sonakshi Sinha's funky avatar in the number.


The song titled 'Aaj Mood Ishqaholic Hai' is composed by Meet Bros and the lyrics are written by Kumaar. The said music video boasts of some exotic sequences which have been shot amidst the sun kissed beach backdrop in Goa and is choreographed by Salman Yusuff Khan. Talking about her look in the song, she added, "I wanted a very bohemian look for the video, and best place to be in that particular style is Goa because of its hippie vibe."


Further adding the details of the song she said, "The song is about being high on love. Love makes the world go round and it's something that gives you a heady feeling that nothing else can." Lastly she added, with the help of T Series- Bhushan Kumar, Meet Brothers, Kumaar and Gifty (Director) she was able to do get the song and video right.