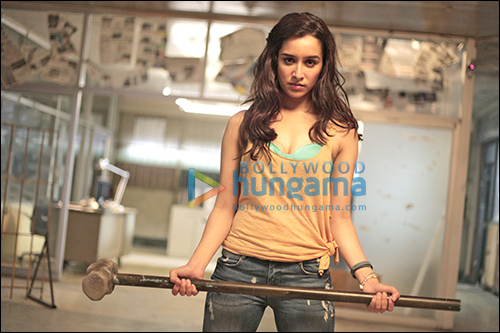 Whether it is Aashiqui 2 or ABCD 2, Shraddha Kapoor has always stuck to her girl-next-door roles in her popular films. However, now, the actress too has decided to experiment with her characters like her contemporaries. The release of Baaghi's trailer has given us a glimpse of the action packed avatar Shraddha Kapoor will be sporting in the film.


Shraddha Kapoor is seen doing some tough action sequences but we hear that the actress did not undergo too much training. Despite that, she will be chasing, hitting and kicking goons coming her way in the film. Talking about it, Shraddha said, "While we were shooting, I was simultaneously prepping for action. We had dedicated some hours each day to prepare for my action sequences. Since it was the first time and I was yet learning the correct techniques, I had a couple of injuries on set but I guess pain is a part of learning anything new. It was a mind blowing experience to do action in the film and especially along with Tiger Shroff who is so good at it. Baaghi is about being a rebel when in love and there is a lot of action in the film."


Shraddha Kapoor has been receiving a lot of appreciation for her new look in the film ever since the release of the trailer. Directed by Sabbir Khan and produced by Sajid Nadiadwala, Baaghi has Tiger Shroff playing Shraddha's love interest and is slated to release on April 29.