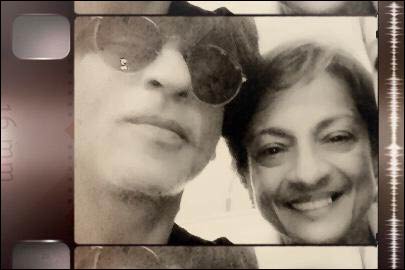 The anticipation to watch one of Bollywood's most popular reel life couple Shah Rukh Khan and Kajol is surely increasing with each passing day. The chemistry that the two share on screen and their friendly rapport off screen is a renowned fact. But Shah Rukh Khan equally adores Kajol's family and recently shared a rather interesting selfie on his Twitter handle.

The 'golden couple' Shah Rukh Khan and Kajol are making a comeback with Rohit Shetty's Dilwale. The film also stars Varun Dhawan, Kriti Sanon, Vinod Khanna, Varun Sharma among others and is slated to release on December 18.