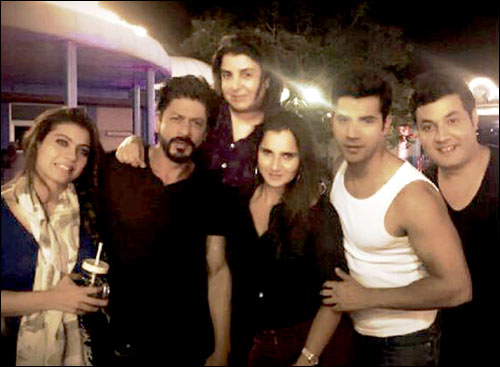 We all are aware of the great camaraderie that Sania Mirza shares with choreographer-filmmaker Farah Khan. The two who often celebrate festivals together were spotted on the sets of Dilwale but this time around, Sania seems to have won the hearts of the entire team of the film with her culinary skills.

Renowned tennis player Sania Mirza visited her friend Farah, who is choreographing for Dilwale along with the entire cast of the film in Hyderabad on October 12 and treated them with biryani. Well, this is not the first time the tennis player has been so kind towards the film's cast and crew. During Bakri Eid, Sania Mirza had sent across biryani to the entire unit of Dilwale and had even promised the team to arrange for a feast once again and we can see that she has definitely maintained her promise. Shah Rukh Khan thanked this sweet gesture of the sports persona on his Twitter handle saying, "@MirzaSania ur returns r impeccable but the Biryani you 'serve'is untouchable. Ur smile won over the whole set. Thx." On the other hand, Sania Mirza uploaded this group photo on her Instagram page saying, "The 'Dilwale' team hosted me in my own city on set thank you all for the laughs.. Love you.." That was not all! Farah Khan too thanked her bestie for the yummy biryani treat and said, "@iamsrk We like guests who bring their own food! "Dilwale ki Daawat "was such fun last nite @MirzaSania @Varun_dvn".

Directed and produced by Rohit Shetty in association with Red Chillies Entertainment, Dilwale is slated to release on December 18, 2015.