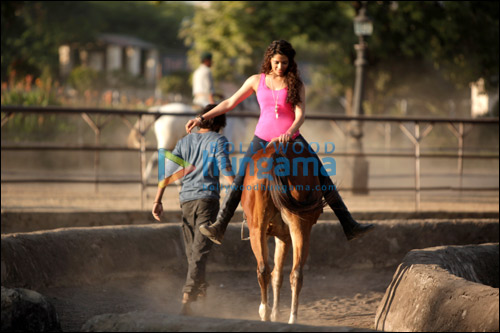 After making realistic films like Rang De Basanti and the biopic Bhaag Milkha Bhaag, Rakeysh Omprakash Mehra decided to follow the path of romance. Unlike his previous films, his upcoming film Mirziya will be an eternal love story between two different souls who are forced to part ways.

Inspired by the folklore of Mirza and Sahiban, Mirziya is set in contemporary times and will be shot extensively in Rajasthan. A few months ago, we got a glimpse of the film's lead Harshvardhan Kapoor riding a horse and practicing archery on the sets of the film. Now, we spotted the film's female lead Saiyami Kher sitting on a horse and being lead by Harshvardhan. While the film has been shot in different parts of Rajasthan, this picture was taken when the crew was shooting in Udaipur.

From what we hear, horses play a very important role in Rakeysh Mehra's this version of the folklore. In fact, it is being said that Harsh and Saiyami had to undergo extensive training of horse riding before shooting for the film.

Amongst many Punjabi tragic love stories, Mirza-Sahiban, is a story of two lovers who elope to live their own life. During the escape, Sahiban breaks the arrows of Mirza, a trained archer, in order to avoid bloodshed and thinking that seeing her, her brothers won't hurt Mirza. But when the aggressive brothers of Sahiban find the two, a rather long fight leads to the death of Mirza and eventually Sahiban kills herself.