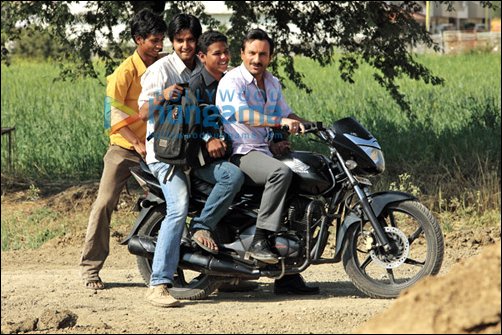 Saif Ali Khan has a secret love in Bhopal. It is the motorcycle that his character rides all over the city in Bhopal. Apparently, Saif became so attached to this motorbike that he has requested his director Prakash Jha to let him keep it in Mumbai, and not just as a memento but to even ride in the city.

The unit refers to Saif's bike as Basanti. Laughs Jha, "It is Saif's character's transportation in my film. Saif got really attached to 'Basanti'. We'd often find him missing from location. Initially, we were worried. But eventually we got know he was exploring Bhopal, the city where Saif has his roots."

In the course of his Bhopal Yatra on 'Basanti', Saif befriended number of locals and even gave them rides on his bike. Such was his passion for zips down Bhopal's roads during the shooting of Aarakshan that he and the motorbike became recognizable figures in and around Bhopal.

Even the locals began to refer to Saif's two-wheeler as Basanti. And now Saif wants 'Basanti' as a keepsake. Says Saif, "I quite enjoyed the shooting in Bhopal. It gave me chance to re-connect with my childhood. And yes 'Basanti' was invaluable."