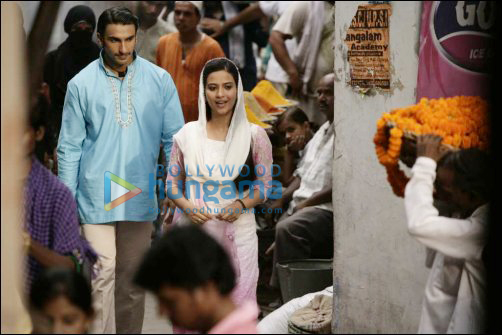 Shooting in the heartland of India, Ricky Bahl makes his move in true Lucknowi style on an unsuspecting girl. Ranveer Singh plots his strategy as he trails his next victim, Aditi Sharma in a crowded market place in Lucknow in this sequence in the film.

Ladies V/S Ricky Bahl is a fun-filled "rom-con" where a smooth and charming conman, Ricky Bahl, cons girls for a living but finally meets his match.

Produced by Aditya Chopra and Directed by Maneesh Sharma, the film stars Ranveer Singh and Anushka Sharma in the lead roles, along with Dipannita Sharma, Aditi Sharma and Parineeti Chopra.

The film is planned for a 9th Dec, 2011, theatrical release worldwide.