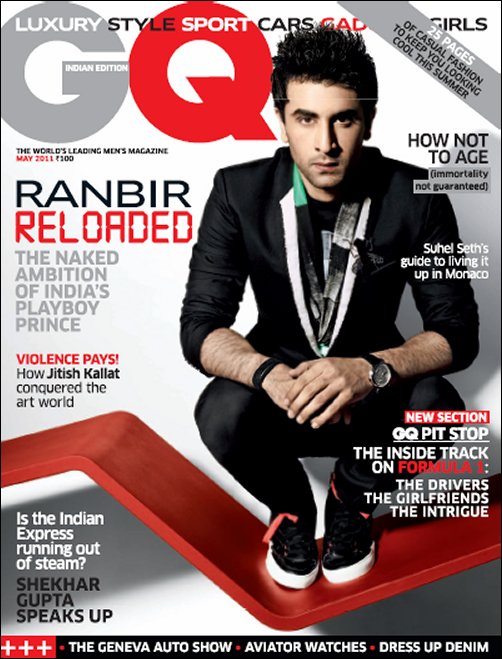 He is the proverbial Bollywood playboy with all the glitz and glamour and oodles of talent to boot. It seems as though Ranbir Kapoor is the unstoppable future superstar of Bollywood. The latest issue of GQ features this young gun talking about girls, cars and money.

Commenting on his image as a womanizer, Ranbir says, "Right now it's like I'm being linked left, right and centre. I open the paper and I'm actually dreading it sometimes. Jesus Christ, you know? I'm 28 years old, I work hard, I'm fairly successful at my job and I'm attracted to women," says Ranbir Kapoor.

Garbed in a casual t-shirt with a stylized scarf and converse shoes by Diesel with an executive yet suave black suit by Dior Homme and accessorized with A. Lange & Sohne watch, Ranbir exudes confidence and sophistication.

He doesn't find it difficult to work with ex-girlfriend Deepika but he agrees that things got little awkward post the episode on Koffee With Karan. "You know, with Deepika it was just kind of strange, because after she gave certain interviews post our break-up or, you know, that episode on Koffee With Karan, it got really awkward. Deepika must be having some angst against me, which she probably took out through this interview. But I still respect her, I still like her, I still feel she's a really nice girl." Talking Sonam's answers on the same show, Ranbir said, "Sonam, I really have nothing to say about because she was just my co-star and I think she said a few things which she really didn't need to."

Ranbir doesn't get pressurized with the ambition he has set out for himself. "Today I have the power to actually green-light a project which everyone has said no to. I don't feel pressurized because I'm a bit arrogant where my career and talent are concerned, because I know I'm going to be the best there is," says Ranbir.