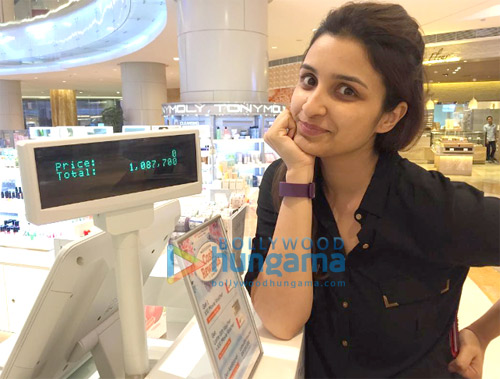 Though there hasn't been any announcement about her upcoming films, Parineeti Chopra seems to have been spending her time travelling across different cities. The actress recently visited the U.S. during Independence Day for the India Parade and now she is in Jakarta for performing at a show.

In fact, Parineeti Chopra has been constantly updating about her Jakarta travel diaries on her Twitter handle and other social networking sites. The actress recently posted an image on her
Instagram page, wherein she is seen shopping at a mall in Jakarta. The picture has Parineeti flaunting her bill which amounts upto 1,087,700 IDR. She even captioned the image saying, "I paid 1 million for 2 shirts!!!! #CrazyCurrency #Jakarta." As unbelievable as that may sound but for the ones who are unaware let us tell you that, 1 Indonesian Rupiah equals to 0.0047 Indian Rupee. Hence, as per the current rate, Parineeti's bill only amounts to approximately Rs. 5000.

But Parineeti Chopra definitely finds the currency fascinating and was seen tweeting once again about it saying, "Haha I love how everybody got their calculators out! 1 million for shirts, 4 million for lunch,the craziness goes on!! #KaunBanegaCrorepati."