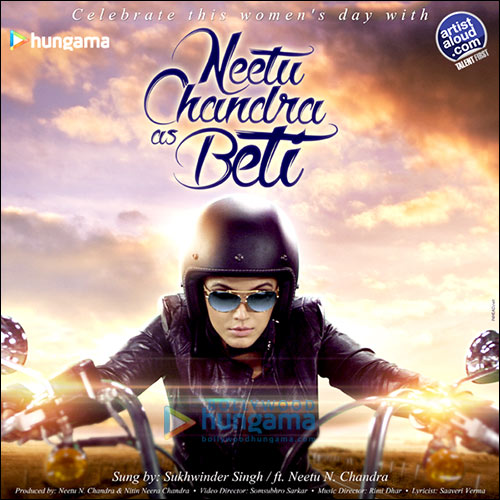 Neetu Chandra who has been engrossed in theatre, international films and producing films, feels stronger in celebrating womanhood through a music video sung by Sukhwinder this Women's Day. In fact we hear that Neetu has recently shot for the video titled 'Beti'. If that wasn't all, we also hear that Neetu who has been supportive of women empowerment has also produced the music video which features vocals by Sukwinder Singh. Commenting on the same Neetu says, "I have been an international sports girl before I was chosen by Hindi Film Industry. I always had this fantasy of someone who is there for women to cure of their misery and every Women's Day I would remind myself of that angel-figure. When Som, my director came up with this idea of this "superwomen" saving the girl child, I was totally kicked about it and decided to not only act but produce through my production house Champaran Talkies. I like doing things which have substance. I produced this especially for Women's Day since I wanted to reach out with an audio visual message about empowerment of women, safety, respect and education."

When quizzed about roping in Sukhwinder for this song she added, "To convey such a strong message we had to go for a stronger voice like Sukhwinder and his voice has a universal attraction with a mix of sufi n folk n we wanted to keep the song very rooted and touchy at the same time." Talking about the message of the track the music video's director Som Sarkar explains, "Neetu's attributes inspired me to do this. She is a strong believer of womanhood. So the visualization and music is inspired by her. She is modern day's Adi Shakti."

This special video and track will be releasing exclusively on Artist Aloud and Hungama this Women's Day on March 8.