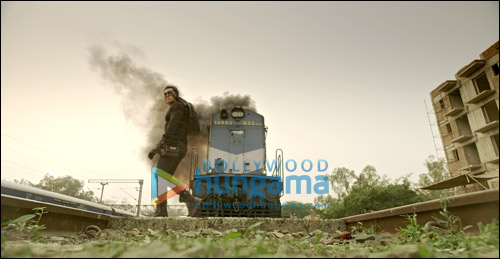 With Kick being touted as one of the biggest films of 2014, Salman's fans are looking forward to the release of the film. Salman Khan, who plays a vigilant in the film, has done some death defying stunts in Kick and fans have picked up one particular shot and termed it as one of the most stylish shot of the film.


The scene has Salman walking on a railway track while a speeding train is only seconds away from hitting him. One more interesting fact about the scene is that it was shot with real time movements at Safdargunj station. The scene in question is a part of high octane chasing sequence where Salman is seen riding a bicycle.


In fact, Salman fans are so impressed with the shot that many of them are trying to edit it and are making their own version and uploading it across various digital platforms.


Kick also stars Jacqueline Fernandez and Randeep Hooda and it is slated to release on July 25.