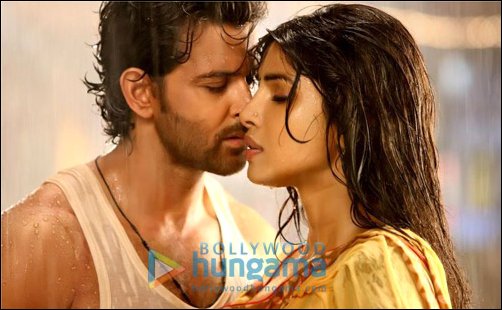 The upcoming Karan Johar film Agneepath starring Hrithik Roshan, Priyanka Chopra, Sanjay Dutt and Rishi Kapoor has been making headlines right from the time the film's first look was out. Well, here's another glimpse of Hrithik and Priyanka in the film.

Looking back at their chemistry in Krissh, there is no question why the makers chose to cast Hrithik and PC together. In the above scene, as the screen fills with the downpour, the duo sizzles and sends temperatures racing.

Meanwhile Priyanka is also excited about her dance number 'Gun Gun Guna' from Agneepath. Priyanka, who plays Kaali, a girl living in the slums, will be seen doing the typical latka-jhatka steps in this dance number. The song has been choreographed by veteran Saroj Khan.

With the film slated for release next year, Agneepath promises to be more than entertaining with powerhouse performers in the cast.