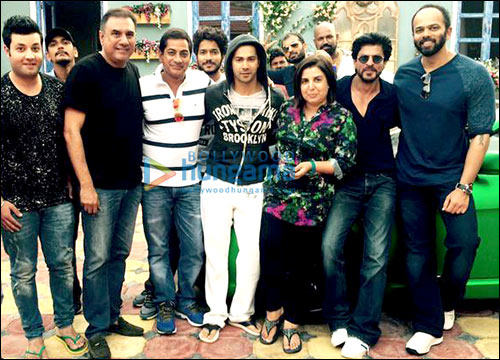 Ever since the time Rohit Shetty announced his next film titled Dilwale, it took everyone's curiosity and expectations to another level altogether and there were many reasons for the same. Firstly, it had the blockbuster pairing of Shah Rukh Khan and Kajol. Secondly, it had the 'hit machine' Rohit Shetty directing the film. Thirdly, Gen-Next stars Varun Dhawan and Kriti Sanon were paired opposite each other for the first time.

The whole team of Dilwale is presently 'located' in Hyderabad, where they are extremely busy shooting for the last leg of the film. Farah Khan, who is also present there for choreographing a song, tweeted an image of the shoot with the caption 'Back in Hyderabad after a day at home, with #Dilwale Team! @iamsrk n @iamsrk @bomanirani now pls stop the PS games!!'

Readers may recollect that the trio of Farah Khan, Shah Rukh Khan and Boman Irani (who also stars in Dilwale) had come together in last year's smash hit flick Happy New Year.

Produced by Red Chillies Entertainment and directed by Rohit Shetty, Dilwale is slated to release on December 18, 2015.